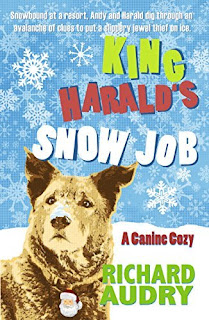 Book description
It’s early December and Andy Skyberg is itching to blow town for a weekend of holiday cheer with old friends—including a date with an attractive divorcée who thinks he’s hot.

But first, Aunt Bev needs a teensy bit of help. She’s managing the Girls’ Weekend Out event at the Beaver Tail Resort and could use some extra muscle. Andy figures he can spare a few hours before hitting the road.

Mother Nature, though, has other plans. A giant blizzard makes an unexpected turn. Andy and his pooch King Harald find themselves snowbound—in a hotel full of hard-partying women, stranded travelers, a hockey team, a man-eating novelist, a belligerent blogger, and one violent, devious jewel thief.

Before you know it, man and mutt are up to their noses in another case. It’s a winter wonderland of fast-paced fun and merry madness, as the sleuthing duo dig out from King Harald’s Snow Job.

Meet the author
Richard Audry is the pen name of D. R. Martin. In addition to his career as a journalist and copywriter, D. R. has written a dozen books, both fiction and non-fiction. His current projects include a fantasy adventure trilogy, a canine cozy mystery series, and historical mysteries set at the turn of the last century.

Guest post
“Hi there. I’m Justine and this is Bobby, and we demand to be included in your story.”

As cozy readers know, any mystery series is going to have regular cast members who appear in each book. In my King Harald Mysteries the two stars are a big goofy mutt called King Harald and his “boss” Andy Skyberg. Because Harald has developed a nose for crime, Andy often finds himself chasing down bad guys. Andy’s Aunt Bev is perhaps the key supporting character, since she often entangles her nephew in improbable situations. Case in point—Andy wouldn’t be interim mayor of New Bergen if not for Aunt Bev’s meddling. Andy’s super-smart best friend Thor is another regular. His function is to provide Andy with a sounding board and a source of information that my co-hero wouldn’t otherwise have. And, of course, there are a number of other characters who will reappear again and again, as Andy and Harald continue their crime-busting adventures.

While the regular cast members show up in each story, there are temporary players who appear in one book and are never heard from again. The most vital of them are the suspects—folks who seem to have some connection to the crime at hand. Naturally, all but one or two of them are red herrings, innocent of any nastiness, but there to keep you, the reader, off track. It’s not much fun, after all, to read a mystery where there’s a bright neon arrow pointing at the perp.

In my new mystery, King Harald’s Snow Job, I had a pretty clear idea who I wanted for suspects. The alleged victim is a best-selling novelist who might be described as a raging narcissist. Several other suspects have reasons to hate her guts. It seemed like a great idea to have one of her ex-husbands—a ne’er-do-well German nobleman—turn up to complicate matters. But as I wrote his role, the poor guy just fizzled out, couldn’t carry his weight. I thanked him for his service and showed him the door.

Then, out of nowhere, came Justine Juveland. I had thought about a book blogger in the story, though just in a minor role. But in writing her character, I found Justine telling me she was a lot more important to the plot that I realized. She had a wonderful love/hate relationship with the narcissistic novelist. Justine was both superfan and a stalker. Though shorter and dumpier, she even dresses and dyes her hair blonde like the novelist.

And just like that, Justine and her big, shambling boyfriend Bobby came to be the scene-stealers and comic relief that the story had needed—while also being top suspects. Except I didn’t realize it until they appeared. Seriously, it was as if they knocked on my door, looking for work, and I exclaimed, “You’re hired!”

I’m sure any novelist will tell you this isn’t an uncommon experience. So much of what we do when we write these stories comes from the deep subconscious. We marinate ourselves in our plots and purposes, and characters like Justine and Bobby just pop out. And I like these two so much that I might have to find some excuse to bring them back to Andy and Harald’s hometown of New Bergen a few more books down the road.