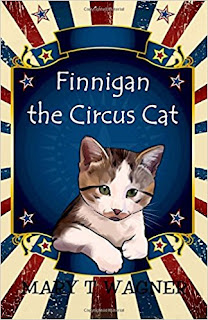 Book description
Finnigan is a foundling kitten who finds a happy home in a small town circus museum, befriended by a pair of "circus mice." Through their adventures, they learn that the family you make can be just as important as the one you came from.

Inspired by a real life “rescue kitten” adopted by the author’s son and his wife and ALSO named Finnigan, this new chapter book series begins as Max and Leroy, two “circus mice” cousins who live at the old, shuttered Farnsworth Circus Museum find their comfortable world up-ended when a new generation of Farnsworths move in.

And when eight-year-old Lucy Farnsworth brings home a tiny foundling kitten and hides him in the barn because her dad is allergic to cats, Max and Leroy need to think fast if they’re going to be able to stay.

With the help of Boomer—the oddly silent family dog—Max and Leroy take the new kitten under their wing and show him the ins and outs of living at the museum, and flying “under the radar.” Along the way, they all come to realize that the family that you make can be just as important as the one you came from. And when Leroy finds himself in deadly peril as the villainous neighborhood cats Hector and Godfrey some a’hunting, it is Finnigan the Circus Cat who saves the day!

Meet the author - Mary T. Wagner
Award-winning Wisconsin author and photographer Mary T. Wagner has been described as "the Midwest's answer to Carrie Bradshaw" and favorably compared to humorist Erma Bombeck...but "in sexier shoes." A native of Chicago, Wagner is a former newspaper and magazine journalist who changed careers at forty by going to law school and becoming a criminal prosecutor. A mother of four, she now lives in in "coastal Wisconsin," where she draws much inspiration for writing from frequent trips to the shore of Lake Michigan, watching the waves ebb and flow and make shifting mosaics of sunlight on the sandy lake floor.

Despite the career shift to law, Wagner never COULD step away from the keyboard entirely, and since returning to writing has published several essay collections which have earned national praise, including RUNNING WITH STILETTOS and WHEN THE SHOE FITS. She counts both wearing spike heels and learning to use a cordless drill and chainsaw among her "late blooming" discoveries, and would be hard pressed to surrender either her favorite stilettos or her power tools.

The spark for her FINNIGAN THE CIRCUS CAT series, aimed at young readers age 7-10, came about because of the intersection of two highly entertaining family matters—one of Wagner’s daughters is a contemporary circus aerialist, and a few years ago her younger son and his wife brought home a tiny “rescue kitten” they named Finnigan. As the wee Finnigan grew, his stripes, moustache, and attitude reminded her of a circus performer full of dash and bravado, and so the match was lit.

The series is narrated by one of Finnigan’s “circus mice” pals, Maxmillian, whom Wagner freely admits to as her wiseacre alter ego. “Seriously,” Wagner said, “that mouse is really the ten-year-old version of me before I had to grow up and sound responsible. When I sit down to write about Finnigan and his friends, I just open the door in my head that he usually hides in, and the story comes out. Whatever Maximillian says is going to happen, I am simply along for the ride!”

My thoughts
Let's start off by saying I loved the cover of this book and the title. Then I read the description and had to have it. What could make a better story then a rescue kitten that is being taught the ropes by two mice. When you read this book you are in for a real treat. Then there is the added touch of the sketches in the book. They are a cute addition. Max and Leroy brought humor to the story as well as a compassion to show that just because you come from different places you can still belong together. They did a good job of making Finnigan a part of their family. I also liked the idea that the story centered around a rescue kitten as we are all about rescuing animals in our house. This is a fun book to read along with you child. I look forward to more adventures of this rag tag team of animals.
Posted by Angela - Bookaunt at Sunday, November 19, 2017