Hummus and Homicide by Tina Kashian - Guest Post and Giveaway 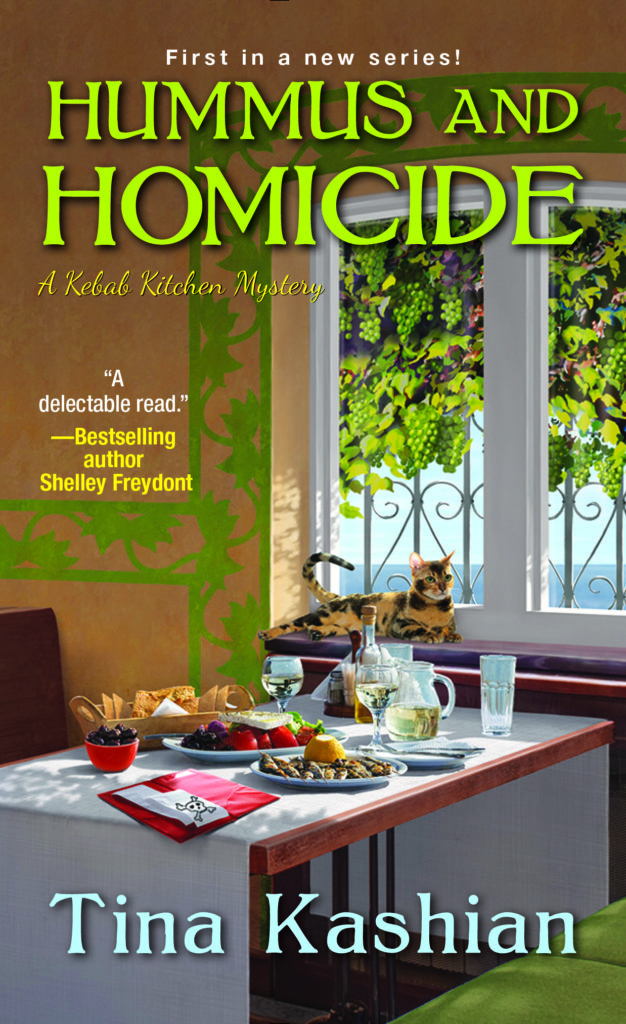 Book description
When Lucy Berberian quits her Philadelphia law firm and heads home to Ocean Crest, she knows what she’s getting—the scent of funnel cake, the sight of the wooden roller coaster, and the tastes of her family’s Mediterranean restaurant. But murder wasn’t on the menu . . .

Things are slow in the off-season in this Jersey Shore town, but Lucy doesn’t mind. She doesn’t even mind waitressing at the Kebab Kitchen. Her parents have put in a new hummus bar, with every flavor from lemon to roasted red pepper. It’s fun to see their calico cat again, and to catch up with her old BFF, who’s married to a cop now.

She could do without Heather Banks, though. The Gucci-toting ex-cheerleader is still as nasty as she was back in high school . . . and unfortunately, she’s just taken over as the local health inspector. Just minutes after eating at the Kebab Kitchen—where she’s tallied up a whole list of bogus violations—she falls down dead in the street. Word on the grapevine is it’s homicide, and Lucy’s the number one suspect . . .

Tina Kashian’s Award-Winning Hummus Recipe
This is my own secret recipe and I make it weekly at home for the kids and the husband. It can be served as a dip with wedges of pita bread or vegetables, and goes well with broiled or grilled meat. It can also be used as a healthy alternative to mayonnaise on sandwiches.

Drain can of chick peas and reserve ¼ cup fluid. Mix tahini thoroughly before using to incorporate oil that separates during storage. Using a food processor or blender, combine and blend all ingredients until smooth. If hummus is too thick, add a few tablespoons of reserved fluid from chick peas and blend again. Pour into serving platter. Enjoy!

Thank you for having me as a guest! I’m excited to introduce readers to Lucy Berberian, the amateur sleuth of “Hummus and Homicide,” the first book in my Kebab Kitchen Mystery series set at the Jersey shore.

1. Lucy’s a recovering Philadelphia lawyer. After her job throws her a curve ball, she packs her bags and unwillingly returns home to her family and their restaurant Kebab Kitchen at the Jersey shore.

2. She can’t cook worth a damn. Everyone in her family can cook, and her mother is a talented chef. Lucy’s mom is trying to teach her, and it’s testing her mother’s patience as well as Lucy’s. We’ll see how it goes…

3. She has a weakness for tall, dark-haired men. One of the main reasons she’s avoided home for a while, is due to an ex (Azad) that broke her heart. Now that she’s back, Azad is even better looking than before. He’s now a chef and hopes to purchase Kebab Kitchen from Lucy’s retiring parents. There’s also a hot, bad-boy motorcycle rider (Michael) who runs a bicycle rental shop next door to Kebab Kitchen. After a stint as dry as the Sahara, Lucy now has two good-looking men interested in her.

4. She is scared of motorcycles, but rides a Harley-Davison and likes it. Michael entices Lucy to ride on the back of his motorcycle. They stop at the boardwalk to share ice cream and, to her surprise, he’s quite charming.

5. Lucy may not have wanted to come back home but now that she’s has, she’s happy. Her mother may be nagging Lucy to get married, but she’s well-meaning. And to Lucy’s surprise, she is bonding with her mom during their cooking lessons. Also, Lucy has missed Ocean Crest, a quaint town at the Jersey shore, and she fondly recalls the scent of funnel cake, the sight of the wooden roller coaster on the boardwalk, and the tastes of her family’s restaurant.

6. Lucy’s best friend is her complete opposite. Katie Watson has been Lucy’s best friend since grade school. Lucy’s petite with dark, curly hair. Katie’s tall and blonde. They also come from different worlds. Lucy is a first generation American, and Katie often jokes that her ancestors sailed on the Mayflower. Katie was raised on meat and potatoes, and apple pie while Lucy grew up eating stuffed grape leaves and hummus. None of their differences matter. Lucy and Katie are besties, and both value their friendship. Lucy is staying with Katie and her husband, Bill, an Ocean Crest police officer.

8. Lucy doesn’t like to exercise, but since returning home she doesn’t have much choice. Lucy jogs (or trudges) the Ocean Crest boardwalk and beach three times a week. Waitressing at Kebab Kitchen doesn’t burn enough calories. Lucy’s fondness for her mother’s cooking and lemon meringue pie, requires serious exercise.

9. Despite her best efforts to keep her distance from her ex, Azad, sparks still fly between them. It doesn’t help that Azad is trying to win her back. Will she give him a second chance?

10. Lucy has a bad habit of stumbling over bodies. Dead ones. She was forced to become a sleuth, but she’s found that she has quite a knack for it. With her best friend, Katie, by her side, they end up solving crime. It’s all just an average day at the Jersey shore.

If you want to find out where Lucy’s adventures lead her and her friends and quirky family, please pick up Hummus and Homicide, the first book in the “Kebab Kitchen” mystery series. Stabbed in the Baklava and One Feta in the Grave are coming soon after!