Knight of Rapture by Ruth A. Casie - Spotlight 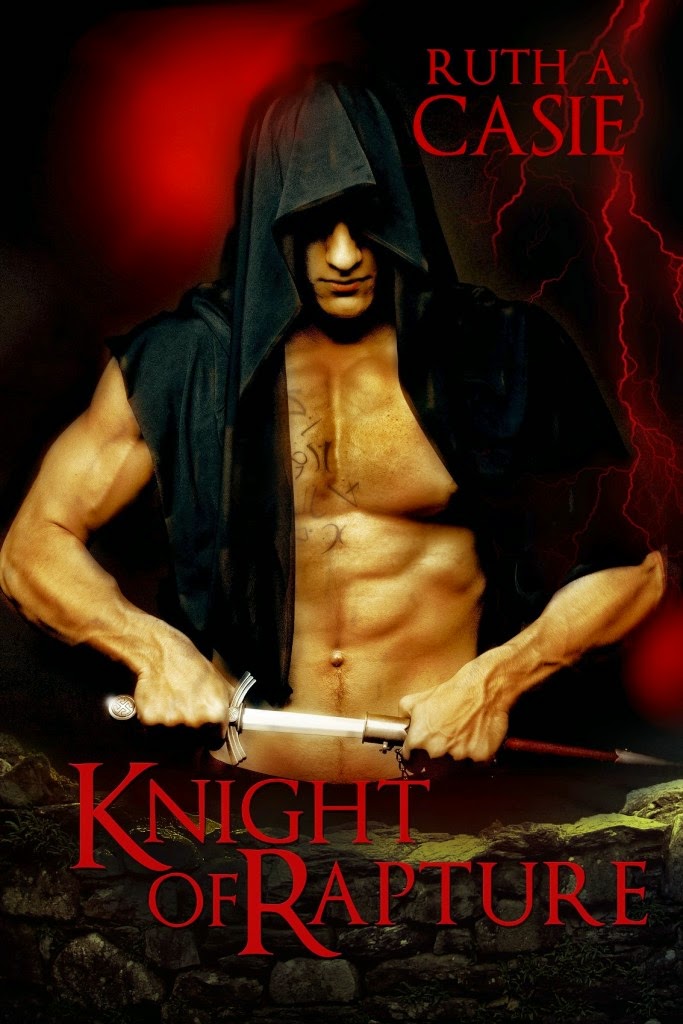 He crossed the centuries to find her…

For months Lord Arik has been trying to find the right combination of runes to create the precise spell to rescue his wife, Rebeka, but the druid knight will soon discover that reaching her four hundred years in the future is only the beginning of his quest. He arrives in the 21st century to find her memory of him erased, his legacy on the brink of destruction, and traces of dark magick at every turn.

Bran, the dark druid, is more determined than ever to get his revenge. His evil has spread across the centuries. Arik will lose all. Time is his weapon, and he’s made sure his plan leaves no one dear to Arik, in past or present, safe from the destruction.

But their enemy has overlooked the strongest magick of all…

Professor Rebeka Tyler is dealing with more than just a faulty memory. Ownership of Fayne Manor, her home, has been called into question. Convenient accidents begin happening putting those she cares for in the line of fire. And then there’s the unexpected arrival of a strange man dressed like he belonged in a medieval fair—a man who somehow is always around when needed, and always on her mind. She doesn’t know who to trust. But one thing is certain. Her family line and manor have survived for over eleven centuries. She won’t let them fall, not on her watch… in any century.

Ruth A Casie is a seasoned professional with over twenty-five years of writing experience but not necessarily writing romances. No, she’s been writing communication and marketing documents for a large corporation. Over the past years, encouraged by her friends and family, she gave way to her inner muse, let her creative juices flow, and began writing a series of historical time travel romance novels.

When not writing you can find her home in Teaneck, New Jersey, reading, cooking, doing Sudoku and counted cross stitch. Together with her husband Paul, they enjoy ballroom dancing and, with New York City close by, going to the theater. Ruth and Paul have three grown children and two grandchildren. They all thrive on spending time together. It’s certainly a lively dinner table and they wouldn’t change it for the world.

Ruth is a Trustee and on the Executive Board of Shelter Our Sister (SOS) in New Jersey. SOS is Bergen County’s only shelter for victims of domestic violence. She frequently speaks at various functions around Bergen County on behalf of the Shelter.


Excerpt:
The lingering threads of the night’s mist faded, burned away by the morning sun. Like a cozy down blanket pulled from a bed, the retreating haze revealed the thriving village and farms. The quiet valley would soon come to life as farmers started their daily chores, the villagers opened their shops, and his soldiers took to the practice fields. Arik’s chest swelled. Was it a sin to be proud of all they had accomplished? He would do anything for them, anything to protect their hearths and homes. The thought of his other responsibilities sent the few lingering thoughts of Bran fly out of his mind like a retreating hawk.
He closed his eyes. “As above, so below. As within, so—“ He took a deep breath and caught the faint scent of lavender and roses. The teasing fragrance announced Rebeka was near. Her morning appearance, with his tankard of watered ale, had become part of the ritual. “…so without,” he continued the rite. “May guidance and love mark our way. And bring success for our clan today. So mote it be.” He opened his eyes.
“The day looks promising.” Rebeka’s voice brought a smile to his lips. She tugged her shawl closer around her shoulders. “M’lord.” Soft puffs of breath surrounded her mouth, a testament to the morning’s chill. She handed him his discarded shirt and waited while he shrugged into it before handing him his tankard.
“Yes. It will be a good day.” It was always a good day when it started with her at his side. “Almost as good as last night.”
Her gaze slid over his broad chest up to his face. Her searing expression brought back the warmth of the past evening’s passion. The flush of her skin was her unspoken response.


He returned his gaze to the valley pretending a deep interest in the smoke now rising from a distant chimney. Faith, how he loved sparring with her.

Be sure to stop by Historical Fiction Virtual Book Tours (click here) to see all the stops on the tour
Posted by Angela - Bookaunt at Thursday, April 02, 2015