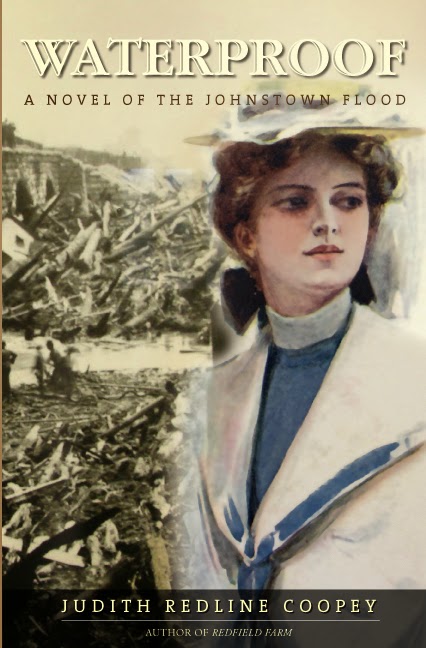 I received this book in exchange for a fair and honest review
Waterproof by Judith Redline Coopey
A Novel of the Johnstown Flood
ISBN: 9780983891826
Paperback

Synopsis:
" Fifty years after an earthen dam collapsed sending a thirty foot wall of raging destruction down on the city of Johnstown, Pennsylvania, Pamela McRae looks back on the tragedy. The flood wiped out Pam's fondest hopes, taking the lives of her fiancé and her brother, the sanity of her mother, and, soon after, her father. Pam is left alone to cope with poverty, loneliness, and despair. The arrival of Katya, a poor Hungarian girl running away from an arranged marriage, gives Pam the chance she needs to re-enter the world. Katya can care for her mother, and Pam can go to work for the Johnstown Clarion as a society reporter. Then Davy Hughes, Pam's dead fiancé, reappears and, instead of being the answer to her prayers, further complicates her life. Someone is seeking revenge on the owners of the South Fork Fishing and Hunting Club, the Pittsburgh millionaires who owned the failed dam, and Pam thinks Davy might have something to do with it. Waterproof, set in Johnstown two years after the flood, examines how people react to tragedy. Some recover from physical injury only to succumb to the psychological affects; some run away; some rise to the challenge and become better people; some seek revenge. For the people of Johnstown, survivors of the flood, it became the measure of their character. Some rose to the challenge while others never got over it, just as many survive, but never really recover from so many of life s calamities. "

My Review:
This is a great historical fiction book and like the other three books I have recently read by this author she has done a great job with her research so you feel as if you are right there reliving the experience of the flood with Pamela. This book is full of drama, mystery and romance so there is something for everyone. The characters are very well developed and done so well that they feel as if they are real people. I have not read nor heard about this flood before so it has me even more interested in what happened. Another good book by this author.