To Win Her Favor by Tamera Alexander 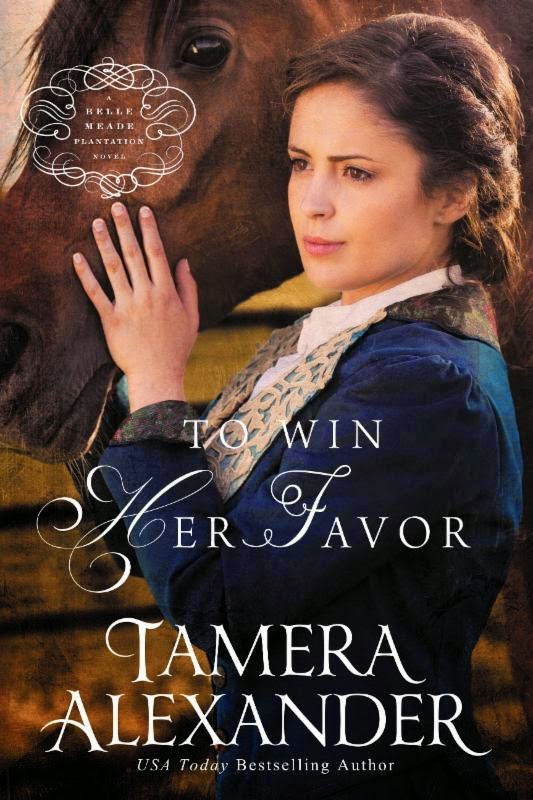 Synopsis
A gifted rider in a world where ladies never race, Maggie Linden is determined that her horse will become a champion. But the one man who could help her has vowed to stay away from thoroughbred racing forever.

An Irishman far from home, Cullen McGrath left a once prosperous life in England because of a horse racing scandal that nearly ruined him. He's come to Nashville for a fresh start, hoping to buy land and begin farming, all while determined to stay as far away from thoroughbred racing as possible. But starting over proves harder than he'd wagered, especially when Maggie Linden's father makes him an offer he shouldn't accept yet cannot possibly refuse.

Maggie is certain that her mare, Bourbon Belle, can take the top purse in the inaugural Peyton Stakes, the richest race ever run in America. Maggie only needs the chance to prove it. To give her that chance---and to save Linden Downs from being sold to the highest bidder---Maggie's father, aging, yet wily as ever, makes a barter. His agreement includes one tiny, troublesome detail---Maggie must marry a man she's never met. A man she never would have chosen for herself.

Review
I enjoyed the continuation of this series. Maggie was a favorite of mine from the first page, I liked that she was a strong person. Tamara has a way with her writing style to pull you into the book so that you feel a part of it. The story also hits you in the heart and you feel for the characters and all they are going through. Another thing I liked about this book was the element of romance that was included. I like a good love story. There are many good things about this book including some of the passages. In this book the author deals with prejudices that were going on after the war. She did a good job of bringing them to life and telling us how the characters dealt with them. I am looking forward to the next book in this series.

About the Author
Tamera Alexander is a best-selling novelist whose deeply drawn characters, thought-provoking plots, and poignant prose resonate with readers. Having lived in Colorado for seventeen years, she and her husband now make their home in Nashville, Tennessee, along with their two adult children who live near by. And don't forget Jack, their precious---and precocious---silky terrier.


Celebrate the release of To Win Her Favor with a Kindle Fire and book giveaway!

One grand prize winner will receive:
Enter today by clicking the icon below. But hurry, the giveaway ends on May 10th. Winner will be announced May 11th on Tamera's blog. Plus stay tuned for more opportunities to win after May 11 with a special Pinterest contest—more details coming soon!