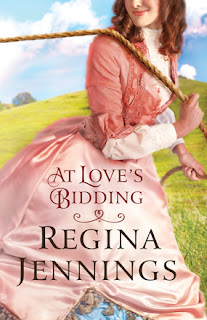 Synopsis:
She sells priceless antiques. He sells livestock by the pound. Is he really the man to make a bid for her heart?

After helping her grandfather at their Boston auction house, Miranda Wimplegate discovers she’s accidentally sold a powerful family’s prized portrait to an anonymous bidder. Desperate to appease the people who could ruin them forever, they track it to the Missouri Ozarks and make an outlandish offer to buy the local auction house and all its holdings before the painting can move again.

Upon crossing the country, however, Miranda and her grandfather discover their new auction house doesn’t deal in fine antiques, but in livestock. And its frustratingly handsome manager, Wyatt Ballentine, is annoyed to discover his fussy new bosses don’t know a thing about the business he’s single-handedly kept afloat. Faced with more heads of cattle than they can count–but no mysterious painting–Miranda and Wyatt form an unlikely but charged partnership to try and prevent a bad situation from getting worse.

What did I think of this book:
As in all of this author's books I have read she pulls you in from the first page and does not let go until the end. I like how her stories read so quickly. Miranda gets herself in a bind when she sold a portrait she should not have then she digs a bigger hole when she buys what she thinks in a regular auction house but in fact buys a livestock auction. I liked how as the story progressed you watched her relationship with Wyatt grow. You will find yourself smiling at all the little errors that Miranda and the whole cast of characters makes as the story goes along. For me this made the story seem more real to life. I also enjoyed that the author gave us a look into how auction houses work. All in all a quick fun read. Highly recommended.

About the author:
Regina Jennings is a graduate of Oklahoma Baptist University with a degree in English and a history minor. She is the author of "A Most Inconvenient Marriage," "Sixty Acres and a Bride," and "Caught in the Middle," and contributed a novella to "A Match Made in Texas." Regina has worked at the Mustang News and First Baptist Church of Mustang, along with time at the Oklahoma National Stockyards and various livestock shows. She now lives outside Oklahoma City, Oklahoma, with her husband and four children.
Posted by Angela - Bookaunt at Wednesday, December 09, 2015