From the author of The Stolen and The Forgotten comes a collection of stories between the stories, a glimpse of the American Faerie Tale series characters in a whole new light.

For more than fifty years, Elaine has lived the life of an outcast elf, stripped of her rank and title in the fae court. Surrounded by her beloved collection of stolen artwork, we may just learn the secret behind her exile, and the one promise too important to break...

It's the day we've all been waiting for - Caitlin and Edward are getting married!  But few weddings ever go without a hitch. Old promises were broken, and new vows will be made...

In The Stolen, Brendan vowed to help Caitlin rescue her young daughter from the Dusk Court, even if it meant sacrificing himself. Alone and in torment, he has come to accept his fate.  Until an unexpected visitor finds her way into his life...

Plus, an exclusive bonus story about the mysterious Legion of Solomon.


ORDER INFORMATION
Three Promises is available for order at

About the author:
Bishop O'Connell is a consultant, writer, blogger, lover of kilts and beer, as well as a member of the Science Fiction & Fantasy Writers of America. Born in Naples Italy, while his father was stationed in Sardinia, Bishop grew up in San Diego, CA where he fell in love with the ocean and fish tacos. While wandering the country for work and school (absolutely not because he was in hiding from mind controlling bunnies), he experienced autumn in New England. Soon after, he settled in Manchester, NH, where he collects swords, drinks, writes, revels in his immortality as a critically acclaimed "visionary" of the urban fantasy genre, and is regularly chastised for making up things for his bio. He can also be found online at A Quiet Pint (aquietpint.com), where he muses philosophical on the life, the universe, and everything, as well as various aspects of writing and the road to getting published.

Visit him at the following locations: 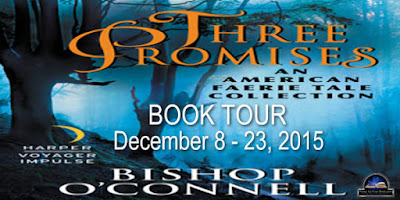