The Searcher by Simon Toyne - Review 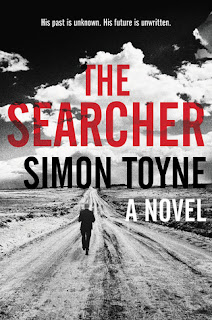 Synopsis:
The author of the acclaimed Sanctus trilogy conjures an eerie epic of good and evil, retribution and redemption—the first novel in the mesmerizing Solomon Creed series in which a man with no memory of his past must save a lost soul in a small Arizona town

On a hilltop in the town of Redemption, Arizona, the townspeople gather at an old cemetery for the first time in decades to bury a local man. The somber occasion is suddenly disrupted by a thunderous explosion in the distant desert. A plane has crashed, and it’s pouring a pillar of black smoke into the air.

As Sheriff Garth Morgan speeds toward the crash, he nearly hits a tall, pale man running down the road, with no shoes on his feet and no memory of who he is or how he got there. The only clues to his identity are a label in his handmade suit jacket and a book that’s been inscribed to him: both giving the name Solomon Creed. When Morgan tells Solomon that he is in Redemption, Arizona, Solomon begins to believe he's here for a reason—to save a man he has never met . . . the man who was buried that morning.

Miles away, three men scan the skies for an overdue plane carrying an important package. Spotting a black cloud in the distance, they suspect something has gone badly wrong, and that the man who has sent them will demand a heavy price if the package has been lost.

To uncover the secret of his identity, Solomon Creed must uncover Redemption's secrets too and learn the truth behind the death of the man he is there to save. But there are those who will do anything to stop him, men prepared to call on the darkest forces to prevent Solomon from seeing the light.

What did I think of this book:
This is the first book that I have read by this author and I am always game for trying a new to me mystery/thriller author.  The story will grab you from the start and not let you go until the end. It is an edge of the seat type of book. I liked how there was not only mystery but adventure and a bit of supernatural theme to the story. The characters were well developed and the writing style was very smooth. I also thought the entire book was fast paced which made you seem to read faster. For me this was a great start to a new series that I will happy to continue reading.

About the author:
Simon Toyne was born February 29th, 1968 in Cleethorpes, England, but spent his formative years in Peterborough. He moved further south, to Goldsmiths College, part of the University of London, to study English and Drama then ended up working as a producer, director in commercial television for almost twenty years.

He quit in 2007, just shy of his fortieth birthday, to try and focus more on writing. His first book, Sanctus, became the biggest selling debut thriller of 2011 in the UK and also an international bestseller, translated into 27 languages and published in over 50 countries.

Simon lives with his wife and three children and splits his time between Brighton, the South of France and various cafes and bookshops in between and wherever his books are sold.