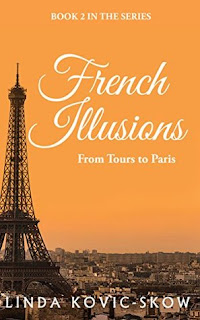 SYNOPSIS
Linda Kovic’s story continues in From Tours to Paris – the final book in the French Illusions series based on her diaries from 1979 and 1980. Still determined to learn French and fulfill her dream of becoming an international flight attendant, she puts her disastrous stint as an au pair behind her and revels in newfound freedom in the city of Tours. She finds lodging, enrolls at a French institute, and spends eight glorious days with Adam before he leaves for the holidays. When he returns, his shocking announcement propels her in a different direction, eventually leading her to Paris. Join Linda as she struggles with money, faces challenges at school, and learns some tough lessons about love and life.

WHAT DID I THINK OF THIS BOOK
I am glad that I had this book in my hands when I finished the first book. Although this book was more about her friendships and relationships and not so much her job. It was nice to get another look into her life while in France. In my opinion she was brave to go through all she did. Travels, schooling, meeting new people. I felt for her at times as she was homesick in a foreign country with no family and at times no money. Just like the first book her writing style was very easy to read and just flowed through the pages. I felt as if I was along on the journey with her.

Originally from Seattle, she currently winters in Gilbert, Arizona and spends summers on a boat in the Pacific Northwest Waters of Puget Sound and British Columbia. She earned an Associate Degree in Medical Assisting in 1978 from North Seattle Community College and a Bachelor of Arts in Business Administration from Seattle University in 1985. She has been married for 30 years and she has two daughters. An enthusiastic traveler, Linda also enjoys hiking, boating, gardening and socializing with friends. French Illusions: My Story as an American Au Pair in the Loire Valley, is her debut memoir and the culmination of a three-year project. The sequel, French Illusions: From Tours to Paris, recounts the rest of her adventure in France.
Posted by Angela - Bookaunt at Thursday, December 17, 2015