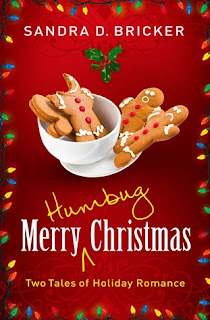 Synopsis:
A Merry Humbug Christmas features two holiday romance novellas from hilarious and heartwarming author Sandra D. Bricker. -- the perfect gift to yourself or someone else at this most wonderfully stressful time of year.

In "Once Upon a Jingle Bell", a Bah! Humbug cruise to the Mexican Riviera is Joss Snow's answer to this year's quest to avoid the holidays completely; at least until she's rebooked on a different kind of cruise altogether. Candy canes, holly wreaths, reindeer and ornaments seem to be stalking her on the 12 Days of Christmas holiday cruise extravaganza. An escape back to land is her only goal . . . until she meets a kindred spirit in rugged Irishman Patrick Brenneman, and then the game is on! Avoid Christmas festivities at all costs . . . except maybe for that one stop under the mistletoe.

In "It Came Upon a Midnight Deer", Reese's guilt over abandoning best friend Joss on their holiday tradition of avoiding all things Christmas is trumped by the joy of her recent engagement. Meeting Damian's family for the first time on idyllic Sugarloaf Mountain is about as far from that Bah! Humbug cruise as she can get, and Reese can hardly wait to get there. But from the moment they hit that deer in the road just two miles from the cabin, everything seems to go wrong. There are no drummers drumming or pipers piping this particular year! And once she sets her future in-laws' family cabin ablaze, she's pretty sure there won't be even ONE golden ring in her future.

What did I think of this book:
I saw this book in the store the other day and the title is what caught my attention as that is how I feel about Christmas this year. This book read very quickly as the characters were so real that you could be friends with them.

In the first story: I loved Joss and found myself smiling the entire way through the story. I have to say she was nicer than I would have been if my bah humbug cruise got cancelled and they put me on a Christmas themed one instead. Patrick seemed so nice I am glad she found him to help her find some happiness. Now I have to say that Connie would have annoyed me to death but she meant well.

In the second story: Of course I fell in love with both Reese and Damien. I felt so bad for Reese and all the bad things that kept happening to her. In fact I even had a lump in my throat reading her story. Damien is such a good guy to keep making her feel good about herself. His family was even so nice to let all the "accidents" go by the wayside. Damien's family seemed like the "perfect" family at Christmas. If I was Reese I would have wanted to punt that little dog Paco - he was such a bad dog.

I liked how both stories told the stories of both friends and how they spent their Christmas and how their minds were changed about the holidays through love.

About the author:
Raised as a Cincinnati Kid, Sandie Bricker spent her formative years dreaming about the movies and television shows she would someday write. It came as no surprise to anyone when she packed up her Ford Fiesta and migrated to Los Angeles to study screenwriting.

"But life is what happens while we're busy making other plans," she jokes. While searching for a way to earn a living and pay her tuition, Sandie says she "stumled into" her own business working as a personal assistant and publicist to some of daytime television's hottest stars. When her mother became ill on the other side of the country, however, Sandie put soap opera clients, film dreams--and Los Angeles--in her rearview mirror to take on a new role: Caregiver.

"I guess most people would see my career as a publicist as a sort of dream job. But giving it up and moving to Florida to take care of my mom until she died turned out to be the best thing that could have happened to me!" she declares. When, at her mother's urging, she channeled her writing dreams from the screen to the page, a reader favorite was born! "Twenty books later," she says, "I'd say God had another plan for me. I do still dabble in screenwriting because my passion for visual storytelling is still a strong force in my life, but the opportunity that comes with combining my Christian faith with publishing platforms is a blessing I never expected and wouldn't trade for anything!"

In November 2013, Sandie packed her car once again and this time headed north. "I was raised in Cincinnati," she says. "So it feels like full circle to find myself led back to Ohio." She is in the process of making a home in Toledo where her home church and best friend of more than 40 years are located. This year, she has taken her established writer brand of Laugh Out Loud Fiction and transitioned to Live Out Loud Fiction. "I think I've grown as a writer over the last couple of years," she says. "Although humor will never filter out of my stories, I do think my readers have enjoyed the deeper spiritual and life lesson threads that have become part of my storytelling."

In the summer of 2014, Sandie entered into a conversation with Eddie Jones, founder of Lighthouse Publishing of the Carolinas, about creating and operating a new imprint for LPC. In August of the same year, BLING! was announced to the world with Sandie named as the Managing Editor for the line. "BLING! is a contemporary imprint of romantic fiction," she says, "but with a little something extra. We're now accepting submissions from novice and established writers alike, and I'm really eager to put my storytelling passion to work in bringing new and different stories to readers looking for a PG-rated source of contemporary content."