Whispers in the Reading Room by Shelley Gray - Review 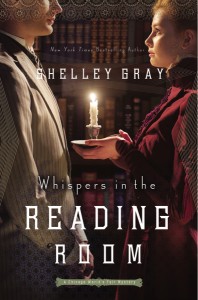 Synopsis;
Lydia’s job at the library is her world—until a mysterious patron catches her eye . . . and perhaps her heart.

Just months after the closure of the Chicago World’s Fair, librarian Lydia Bancroft finds herself fascinated by a mysterious dark-haired and dark-eyed patron. He has never given her his name; he actually never speaks to a single person. All she knows about him is that he loves books as much as she does.

Only when he rescues her in the lobby of the Hartman Hotel does she discover that his name is Sebastian Marks. She also discovers that he lives at the top of the prestigious hotel and that most everyone in Chicago is intrigued by him.

Lydia and Sebastian form a fragile friendship, but when she discovers that Mr. Marks isn’t merely a very wealthy gentleman, but also the proprietor of an infamous saloon and gambling club, she is shocked.

Lydia insists on visiting the club one fateful night and suddenly is a suspect to a murder. She must determine who she can trust, who is innocent, and if Sebastian Marks—the man so many people fear—is actually everything her heart believes him to be.

What did I think of this book:
This was a good addition to a fun series. In this book we get to know Lydia and Sebastian. Also this book has all things I love about a book: history, mystery and a little romance. A perfect combo. You also can not be disappointed with a book that has a character or two that loves books as much as I do so there is some talk about books. I thought the author did a good job of developing the characters and describing the settings so you felt as if you were a part of the story. I thought the mystery part of the book was exciting and made the story fun to read. Even though this book is a part of a series you can read it as a stand alone book.

About the author:
Shelley Gray is the author of The Heart of a Hero series. Her Amish novel (written as Shelley Shepard Gray), "The Protector," recently made the New York Times best seller list. A native of Texas, she earned her bachelor’s and master’s degrees in Colorado and taught school for ten years. She and her husband have two children and live in Southern Ohio.