The Gilded Cage by Judy Alter - Spotlight and Giveaway 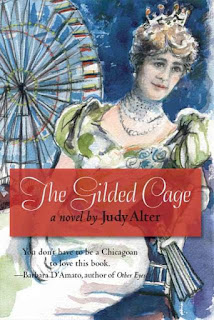 
Synopsis:
Born to a society and a life of privilege, Bertha Honoré married Potter Palmer, a wealthy entrepreneur who called her Cissy. Neither dreamed the direction the other’s life would take. He built the Palmer House Hotel, still famed today, and become one of the major robber barons of the city, giving generously to causes of which he approved. She put philanthropy into deeds, going into shanty neighborhoods, inviting factory girls to her home, working at Jane Addams’ settlement Hull House, supporting women’s causes.

It was a time of tremendous change and conflict in Chicago as the city struggled to put its swamp-water beginnings behind it and become a leading urban center. A time of the Great Fire of 1871, the Haymarket Riots, and the triumph of the Columbian Exposition. Potter and Cissy handled these events in diverse ways. Fascinating characters people these pages along with Potter and Cissy—Carter Harrison, frequent mayor of the city; Harry Collins, determined to be a loser; Henry Honoré, torn between loyalties to the South and North; Daniel Burnham, architect of the new Chicago—and many others.

The Gilded Cage is a fictional exploration of the lives of these people and of the Gilded Age in Chicago history.


"The Gilded Cage is a wonderful recreation of early Chicago and the people who made it what it is. Central character Cissy Palmer is a three-dimensional, real, vibrant person. The Gilded Cage is fiction, but firmly based on fact—the Chicago Fire, the prisoners from the War Between the States interred in Chicago, the newcomer Potter Palmer, the explosive growth of wealth in a prairie town, deep poverty adjacent to great riches—the American experience laid bare. You don’t have to be a Chicagoan to love this book." -Barbara D’Amato, author of Other Eyes


Praise for the book:
“The Gilded Cage is a wonderful recreation of early Chicago and the people who made it what it is. Central character Cissy Palmer is a three-dimensional, real, vibrant person. The Gilded Cage is fiction, but firmly based on fact—the Chicago Fire, the prisoners from the War Between the States interred in Chicago, the newcomer Potter Palmer, the explosive growth of wealth in a prairie town, deep poverty adjacent to great riches—the American experience laid bare. You don’t have to be a Chicagoan to love this book.” -Barbara D’Amato, author of Other Eyes

About the Author:
Judy Alter is the award winning author of fiction for adults and young adults. Other historical fiction includes Libbie, the story of Elizabeth Bacon (Mrs. George Armstrong) Custer; Jessie, the story of Jessie Benton Frémont and her explorer/miner/entrepreneur/soldier/politician husband; Cherokee Rose, a novel loosely based on the life of the first cowgirl roper to ride in Wild West shows; and Sundance, Butch and Me, the adventures of Etta Place and the Hole in the Wall Gang.
For more information visit Judy Alter’s website. You can also connect with her on Facebook, Twitter, Pinterest and Goodreads.


Giveaway:
This giveaway is open to the US only and is for one paperback copy of The Gilded Cage. The winner will be drawn randomly by Rafflecopter. Once the winner is drawn they will be emailed and have 48 hours to respond or another winner will be drawn. *It is mandatory that you leave a comment to win, if you do not your name will be thrown out. Thank you and good luck

The smell. He would never forget the smell. It crept into the railroad car and clung to his clothes and the prickly plush seats on which he’d sat and slept for two days. It was almost strong enough that he thought he could reach out and touch it. A whiff of animal odors, a hint of sewage, but mostly a swamp-like mustiness, oppressively heavy.

The train pulled into a siding somewhere in Chicago, and Potter Palmer prepared to get off. But a mocking voice inside his own head urged him to stay on the train until it went back east rather than get off in a place that smelled foul. He hesitated, peering uncertainly out the window to see only an empty, muddy field with small buildings in the distance. In his mind, he saw Lockport, New York, with its neat frame homes with white picket fences, carefully tended shops, lovely old trees. Or New York City—he could take the train back to the city and carve a sophisticated life for himself there. Then, with sudden determination, he picked up his luggage and stepped from the train. He had made up his mind his future was in Chicago, and he’d be a fool, he thought, if he didn’t even give it a try. But a part of him admitted it didn’t look promising.

Even as a child in the Quaker village of Potters Hollow, New York, Potter Palmer had longed for activity, for complexity, and the comings and goings of people. The gentle souls of Potters Hollow, including his own family, led quiet, tranquil lives. No one planned to leave the village; indeed, no one ventured beyond its boundaries any more often than necessary. Potter had known discontent almost since he was old enough to think, but he kept it to himself. A hard worker, he was offered a partnership in the local mercantile store before he was twenty, but it could not hold him. Within a few years, he opened his own store in nearby Lockport, then enjoying a modest boom of sorts. But Lockport was an old and settled town, and his discontent grew, even before the town’s boom fizzled. Potter Palmer was a careful man, though, and he studied his choices and in effect made a life plan. New York and Philadelphia were ruled out—too old, too established, not the places to offer opportunity to newcomers. Cleveland? Pittsburgh? Mere specks on the map. Too dull.

He studied whatever he could find in newspapers about Chicago and, finally, like a man playing pin the tail on the donkey with his career, determined that was where he would make his new start. No, a bad smell wasn’t going to stop him.

It was 1852, he was twenty-six years old, and he was going to make a fortune. By then, Chicago had the telegraph, gaslights, the Michigan and Illinois Canal that brought oceangoing ships from Montreal, and it was a growing railroad center. A man could make his fortune there.

In Iroquois, the name “Chicago” means “Place of the Bad Smell” or “Place of the Wild Onion.” Wild onions grew in abundance in the swampy marshlands where the Chicago River met Lake Michigan. In the late 1830s, Chicago had a population of slightly over four thousand. Potter half regretted that he hadn’t arrived ten years earlier, completely overlooking the fact that he had been a young teenager at the time.

By 1850, a series of canals connected Chicago to several shipping ports and it was becoming a trade center, land values were still rising, and a boom was on in Chicago. It was indeed the place for a man like Potter Palmer.

When Palmer stepped from the train, several local men leaned against an empty freight car on an adjoining track. Their clothes were ragged, their hair unkempt, and their faces sullen, the expression in their eyes flat and dead. Palmer presumed they were waiting for work, loading the car. If I fail, he thought, pray God I save enough money to go back east before I end like those men. And then, I won’t! By God, I will not fail!

Palmer knew the men were watching, and he turned to look at them. They never acknowledged his stare nor flinched under it. He decided against trusting his luggage to any of them. He looked for a depot but saw only an open field, an apparently empty shack, and, some distance away, a muddy road where a few draymen waited with their wagons. He turned back to the conductor.

“Is there a stationmaster?”

“Can you help me arrange to get my trunk to the Sherman Hotel?”

The conductor nodded. “See that wagon over there? The one pulled by the dark brown draft horse? Driver is Ed Johnson. You tell him Jake Barney told him to come get your trunk and take good care of it.” The conductor liked the way this man looked at a person when he spoke, with a direct clear gaze.

“Thanks.” Potter reached into his pocket for a tip, but the conductor waved him away with a cheery, “You’ll be needin’ that in this town.”

There was a wooden walkway of sorts, but by the time Palmer reached the roadway, which was almost as deep in mud as the side of the train track, his pants were wet to his knees and clung uncomfortably to his legs. He hailed Johnson and made the arrangements, paying the drayman in advance. But when Johnson motioned for him to climb up on the seat, Palmer shook his head. “I’ll walk. I want to see the city. Which way to the business district?” He plopped his leather grip into the wagon.

Johnson smothered a grin at the idea of a business district and nodded his head to the north. Palmer set off at a determined pace, ignoring the mud as best he could. He followed a plank sidewalk, but passage there was almost as treacherous as in the mud. Loose boards threatened to fly up as he stepped on them, and he was forced to dodge an occasional gaping hole beneath which the mud and muck lurked. A horseman in a hurry came too close to the edge of the sidewalk and threw mud so high it landed on Palmer’s coat. There was a distinct wet chill in the air, and Palmer shivered as the cold dampness penetrated his clothes. Garbage flowed in a trough along the edge of the street, and at one point he saw pigs running loose, feasting on the sewage. The smell was still with him. What have I gotten myself into?

He walked by buildings that seemed to squat on the ground. There was no space between them and the spongy ground on which they sat. Palmer realized that they had no foundations, no cellars, no sewers. Horses and carts made mud-like hash of the street, and horse dung was mixed in with the mud. But the ground itself, that spongy, mucky wetland, dominated. It gave off the smell of the swamp—or the wild onion.

It was not a long walk to the center of the city, though the chill air and his damp clothes made it seem endless. At Courthouse Square, near Madison and State streets, the courthouse dominated the landscape, an imposing brick building with a tall bell tower. But Palmer looked with more interest at the strange mixture of buildings around it. The marble-fronted Sherman Hotel on one corner, his destination, looked solid and respectable. Opposite the hotel was the First Baptist Church, its tall steeple rivaling the courthouse bell tower in height. But along the far side of the square a vacant prairie stretched, mostly mud with a few wild grasses. At the corner of Randolph and Washington, tumbledown two-story frame houses threatened to sag under their own weight at any moment. In the second-story window of one of these buildings, he saw a sign reading “Carter Harrison, Lawyer.”

“Not much of an advertisement for a lawyer,” he said to himself.

Wednesday, May 25
Review at History From a Woman’s Perspective

Friday, May 27
Review at In a Minute

Monday, May 30
Review at Book Nerd

Tuesday, May 31
Spotlight at CelticLady’s Reviews

Monday, June 13
Review at Reading Is My SuperPower
Spotlight at A Literary Vacation