To Catch a Treat by Linda O. Johnston - Spotlight and Guest Post 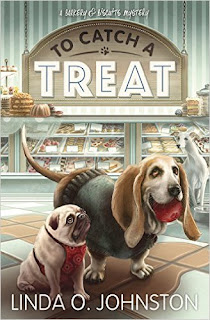 Synopsis:
Carrie Kennersly, veterinary technician and owner of the Barkery and Biscuits bake shop, agrees to a day of hiking with her brother Neal mostly because she wants to meet—and critique—his latest romantic interest, Janelle Blaystone. But instead of judgment, Carrie has only sympathy for Janelle, whose beloved black Labrador, Go, was recently dognapped along with many other purebred pets.

Janelle thinks the culprit is Ada Arnist, a wealthy homeowner spotted at the dog parks where Go and the others were stolen. Soon after Janelle confronts her, though, Ada is found dead. With Janelle and Neal on the suspect list, Carrie must solve the mystery before the police bark up the wrong tree.

for Midnight Ink. Her latest cozy mystery series, the Barkery and Biscuits Mysteries

are also from Midnight Ink.

I'm taking this delightful tour because my second Barkery & Biscuits Mystery, TO CATCH A TREAT, has just been released. It's a sequel to BITE THE BISCUIT, which was published a year ago.

My Barkery & Biscuits Mysteries feature a protagonist who's dear to my heart, Carrie Kennersly, a
veterinary technician who decides to do more with her life while keeping her initial career going part-time. In BITE THE BISCUIT, Carrie had just bought a friend's bakery, Icing on the Cake, and turned half of it into Barkery and Biscuits, where she bakes and sells healthy dog treats she developed as a
vet tech. Of course, it's a cozy mystery series, so someone gets murdered and my amateur sleuth has to solve the crime. In BITE THE BISCUIT, someone who didn't like the pet retail competition got
murdered and Carrie became the main suspect. That was why she got involved.

In the second in the series, TO CATCH A TREAT, Carrie again has to solve a murder, this time
because her brother Neal's new romantic interest, Janelle Blaystone, becomes a suspect. Janelle's
beloved dog Go was dognapped from a dog park in Los Angeles and winds up being found at a pet
shelter in Knobcone Heights. Coincidence? Janelle doesn't think so, and when the person she
believes to be the petnapper is found murdered, of course Janelle becomes the suspect--and Carrie has to help her.

Why is Carrie so special to me? Partially it's because she loves dogs--and I identify with that. It's also because she's living several dreams in her life at the same time. She still enjoys being a vet tech and continues with that career part time. She also has always wanted to be an entrepreneur, and that dream is also coming true with her new shops.

These days, I'm a full-time writer and really enjoy it. But when I started writing and getting published, I was also an attorney and practiced law at the same time. Well, not exactly the same time. I got up an hour earlier than anyone else in my household so I had some writing time. At least I got up earlier than any of the humans. I've been owned by Cavalier King Charles Spaniels for many years, and my pups also got up to keep me company.

And in case you're not aware of it, all of my mysteries involve dogs! Along with the Barkery & Biscuits Mysteries, I also write the Superstition Mysteries which feature, along with protagonist Rory Chasen, her dog Pluckie--who happens to be a very lucky black and white dog. And previously, I wrote the Pet Rescue Mysteries and the Kendra Ballantyne, Pet-Sitter Mysteries. Oh, and I also write romances for Harlequin, and have been writing for their paranormal Nocturne line, where a lot of the canines I create are shapeshifters who are part of Alpha Force, a covert military unit of shapeshifters.

I'd love to hear from you. Come visit my website www.LindaOJohnston.com, or visit me on Facebook. I also blog every Wednesday at Killer Hobbies, on the 18th of each month at Killer Characters, and on the first Monday of each month at InkSpot.