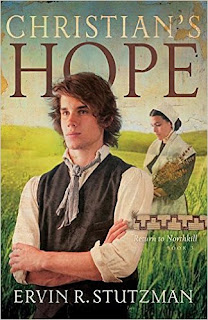 Synopsis:
When Christian Hochstetler returns to the Amish after seven years in captivity, he finds that many things have shifted.

Captured as a child during the French and Indian War, Christian has spent much of his life among Native Americans, who cared for him and taught him their ways. Now that Christian is home, his father wants him to settle back into their predictable Amish life of farming, and Christian's budding friendship with Orpha Rupp beckons him to stay as well.

Yet Christian feels restless, and he misses his adoptive Native American family---who raised him as their own son. When faced with a life-altering decision, will Christian choose the Amish identity that his father desires for him? Or will he depart from his family and faith community yet again?

Christian's Hope tells the story of the younger brother of Joseph and son of Jacob, whom readers have come to love in the first two books in the Return to Northkill series. Based on actual events and written by a descendant of the Hochstetler family,Christian's Hope brings the sweeping epic of the Return to Northkill series to a soul-stirring end.

My thoughts:
This book was interesting to me. I can not imagine what Christian was going through after having lived with the Native American for many years and then returning to the Amish. I can only imagine that it was hard to return to Amish life after that as things were so different between the two worlds. Christian had a lot to deal with - wanting to return to his adopted family yet wanting to stay in the Amish world. I like that this entire story is based on actual events. It gives us a glimpse into what some people had to actually go through. I thought the author did a good job of not only capturing the time and place of the story but the emotions felt by the characters. They were well devloped. This is the third book in this series and I have not read the first two but I was able to keep up with the story line. I wish I would have found this author with book one as he has me wanting to know more. So I will be going back to the rest of the series.

About the author:
Ervin R. Stutzman is author of Jacob's Choice,Joseph's Dilemma, Tobias of the Amish, and Emma,A Widow Among the Amish. Born into an Amish home in Kalona, Iowa, Stutzman based the Return to Northkill series on the life of his ancestor, Jacob Hochstetler. He has been featured on TLC's Who Do You Think You Are?
Posted by Angela - Bookaunt at Thursday, October 27, 2016