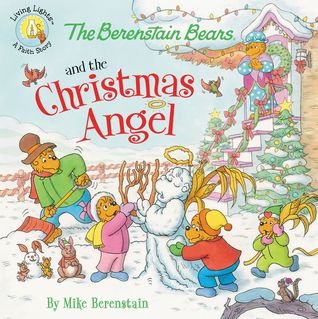 
It is almost Christmas and there is finally snow in Bear Country. Brother, Sister, and Honey Bear are ready for some winter fun! But when they can’t decide what kind of snowbear to build, Honey Bear’s snow angel gives the older cubs a great idea. Soon the cubs have built a Christmas snow angel. Later, as they warm up with some hot cocoa, Mama and Papa give the cubs a little lesson about some very special angels and the work they do for God.

My thoughts:
I had fun reading this latest edition of the adventures of Brother and Sister Bear. There is something that takes you back to your childhood when you are reading this book to your little ones. This one is Christmas themed so it will help you to get in the holiday spirit. I think Mike Berestain has done a great job in carrying on his parents legacy with this book. It is nice that this is not just a good book but it also teaches a lesson. This book gives kids a lesson about angels. The illustrations are bright and vivid so they will grab your child's eyes. This makes a good gift for the holidays.

About the author:
Mike Berenstain grew up watching his parents, Stan and Jan, working together to write and draw these lovable bears. Eventually he started drawing and writing about them too. Mike is married to Andrea and they have three children. They live in Pennsylvania, in an area that looks a lot like Bear Country.

Mike's earliest memory is of his parents studio in suburban Philadelphia. He remembers sitting on the floor scribbling on yellow typewriter paper with a big black pencil. His mother looked at the tangled hairball he had created, pointed out some random shape and said, "Look! Youve drawn a fish!" It did, indeed, look like a fish. That was his first drawing lesson. Hes been drawing ever since.

Aside from drawing, Mikes primary interests growing up were playing whiffle ball with his older brother Leo, collecting insects, stamps, coins, bottle caps, baseball cards, etc., building model planes, playing Davy Crockett in the backyard and fishing. He was also interested in watching the creation of his parents magazine cartoons during the 50s and finally, the birth of the first Berenstain Bears book in 1962. Hes often asked which is his favorite Berenstain Bear book. The answer is THE BERENSTAIN BEARS PICNIC, created when he was twelve. It features a picture of Papa Bear getting a big load of garbage dumped on his head. He thought this was very funny. Ever since, hes enjoyed drawing garbageapple cores, banana peels, old bed springs and the like.

Mike attended art school in Philadelphia in the early 70s, then worked as a designer in the Childrens Book Department of a New York publisher before starting his career as an author and illustrator. His first childrens book was published in 1976 followed by some thirty more over the next sixteen years. These ranged in subject from wizards to dinosaurs.

Since the late 80s, he has been very much involved as a writer and illustrator with his familys creation, the Berenstain Bears. He continues to work with his mother, Jan, creating new books, writing and illustrating.

Aside from the bears, Mike is interested in many thingsin classical music, American history, astronomy and physics. He likes to ski. He spends a lot of time with horses.

Mike is married, his wifes name is Andrea. They have three children whose antics and activities growing up have provided inspiration for many Berenstain Bears books over the years."
Posted by Angela - Bookaunt at Wednesday, October 19, 2016