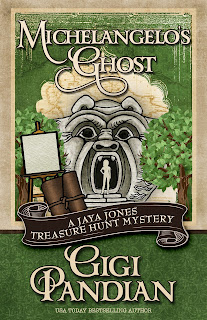 A lost work of art linking India to the Italian Renaissance. A killer hiding behind a centuries-old ghost story. And a hidden treasure in Italy’s macabre sculpture garden known as the Park of Monsters…

Filled with the unexpected twists, vivid historical details, and cross-cultural connections Pandian is known for, Michelangelo’s Ghost is the most fast-paced and spellbinding Jaya Jones novel to date.

When Jaya’s old professor dies under eerie circumstances shortly after discovering manuscripts that point to a treasure in Italy’s Park of Monsters, Jaya and her brother pick up the trail. From San Francisco to the heart of Italy, Jaya is haunted by a ghost story inexorably linked to the masterpieces of a long-dead artist and the deeds of a modern-day murderer. Untrustworthy colleagues, disappearing boyfriends, and old enemies—who can Jaya trust when the ghost wails?

About The Author
USA Today bestselling author Gigi Pandian spent her childhood being dragged around the world by her cultural anthropologist parents, and now lives in the San Francisco Bay Area. She’s the author of the Jaya Jones Treasure Hunt mystery series (Artifact

and The Masquerading Magician

Gigi’s debut mystery was awarded a Malice Domestic Grant, the follow-up won the Left Coast Crime Rose Award, and her short fiction has been short-listed for Agatha and Macavity awards. A breast cancer diagnosis in her thirties taught her two important life lessons: healing foods can taste amazing, and life’s too short to waste a single moment. Find her online atwww.gigipandian.com 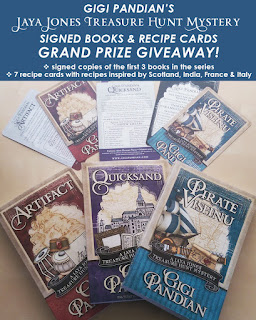