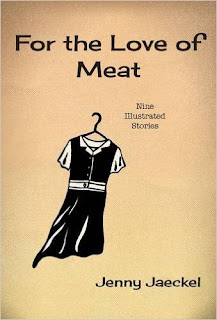 Synopsis:
For the Love of Meat combines whimsical and surreal illustrations with engaging, intimate encounters that explore the depths of human experience. Unique and diverse in setting, and with touches of magical-realism, these nine stories will tug at the strings of the wandering, romantic heart, setting it delightfully ablaze.

In Wander the Desert, Sister Aurelia, a nun from the early 20th century, finds herself stranded in the Mexican desert with nothing but a few cobs of corn and a stray horse who becomes her faithful companion. In Stumble and Fall, we meet Dara, a young Londoner hungry for adventure who, unwilling to settle for the safety and comfort of home, travels to Vancouver, city of immigrants, where a handsome stranger entices her to take a leap into the unknown. The Two explores the tender bond between two young growing up in 1940s Philadelphia, who are as inseparable as light and shadow. As one of the girls tragically becomes ill, the impact on the other shows how true connections of heart and spirit are not bound to time and place. And Mémé, set in Haiti in the 1800s, is told from the stunning perspective of a slave who, as a child, witnesses the brutal murder of her mother, and survives through her connection to her brother and the natural world.

Jenny Jaeckel’s compelling storytelling takes us across the world and through the ages, with remarkable insight and soul-moving moments, when paths cross and time unfolds. Her language, imagery and attention to detail plunge the reader into these memorable lives, soaking us in tales of adventure, courage, love, loss, longing and all the hope in between.

About the author:
Jenny Jaeckel grew up in Berkeley and Ukiah of Northern California, has lived in Mexico, Spain and currently lives in British Columbia with her husband and daughter.

She holds a Bachelor of Arts in Creative Writing from The Evergreen State College, a Master of Arts in Hispanic Literatures from the University of Massachusetts at Amherst. She is a certified interpreter and translator, and has taught Spanish at three universities. She is the author and illustrator of three graphic memoirs. For the Love of Meat is her first book of fiction.

1. Somewhere in Granada, Spain, there really is a man in a shop with a large puppet that looks like him. Or at least there was twenty-one years ago when I was there travelling, and happened to stop in and see them. That random memory inspired one of the stories, “The Kid”.

2. “The Teteriv” was inspired by a strange, medieval-type dream that included a chance encounter and attraction between two servants of nobles.

3. “Mémé” was also inspired by a dream, also in a very different time and place. The most striking things about the dream, other than the setting, were the brother-sister relationship and the scene of the dog attack.

4. There is just one story based on a real person, the title story, based on my maternal grandmother. My grandma was very open-minded and accepted the many aspects of my mother’s “alternative lifestyle,” except for the one thing that dismayed her deeply, that we were vegetarian.

5. The characters in “The Two” and “Mémé” are related, but separated by several generations. I explore this connection, and much of the family story in my upcoming novel, House of Rougeaux.

6. Father Sebastian (“so young he still had acne”), a minor character in “Wander the Desert” which takes place in Mexico in the 1930’s, shows up “ancient” in the background of another story, “Up on a Mountain,” 40 years later in California.

7. Rebecca in “The Kid” leaves Spain to go see her grandmother in Los Angeles, who is secretly the grandmother in the title story “For the Love of Meat”.

8. Certain scenes from “Up on a Mountain” were inspired by childhood memories growing up on communes in Berkeley and north of the Bay Area.

9. Most of the characters in “Stumble and Fall” were imagined by splicing together a variety of ideas based on numerous real people and places into a completely fictional story.

10. “The Incident” was inspired in part by a visit to a monastic Buddhist community in the south of France.

Excerpt:
From the short story Stumble and Fall:

She’d been in the city six months. Her sojourn in the Colonies.

“Why do you want to go there?” her friend Elsie demanded when they met at the coffee shop round the corner from her North London flat. “It’s going to be decidedly provincial.” Elsie never liked it when Dara went away.

Dara had been abroad several times. The first, not counting two family holidays in France, was a student exchange in Rio at age sixteen, which had shocked her every sensibility and every relative at home. Members of the family went off to Israel and often stayed forever, but that was a religious imperative. Rio was not the Holy Land; it was a riot. By the time her classmates finally succeeded in teaching her a cumbia, one night at a party, something staid in her had been made loose. When she returned home at the end of that year she had a bag stuffed with bootlegged cassette tapes and a secret restlessness in her heart.

Lisbon had been her last adventure. She taught English for a year at a grammar school there and that was now five years ago. Coming back to London that time felt grey. Things hadn’t taken off in Portugal the way she’d thought they might. She’d kept up her Portuguese via a group on Tuesday nights, which was how she met Jeremy.

He had a samba collection, she had a samba collection. They fell into a kind of love, moved in together and developed a premarital routine that in three years’ time had begun to grow stale. Dara loved him, or she loved them, and she grieved when the thing began to die. The relationship survived their artificial resuscitations, nominally, for a time, until it was like a body neither of them could any longer pretend was alive.

She lay on the burial mound for a week, every surface rubbed raw. A month passed, two. Her grief shrank to a stone she carried in her chest. It had a way of rolling and rattling like a bottle on the floor of a car. It could disappear and then come clunking out of nowhere. She missed the comfort of Jeremy’s familiar smile and sandy hair and the way he wrapped her up in his arms at night. Then again, she didn’t miss his stupid laugh, or his long silences, or his constant consumption of cinnamon buns. Sometimes she thought if she ever had to open the cupboard and see cinnamon buns one more time she’d leap straight out the window.

Then one morning, alone in her bed, she awoke to a fresh rain slashing at the window, a rogue beam of sunlight spotting the corner of the curtain, and she knew it was time to go.

Email ThisBlogThis!Share to TwitterShare to FacebookShare to Pinterest
Labels: Historical, Pump up your book