Memory of Muskets by Kathleen Ernst - Guest Post and Giveaway 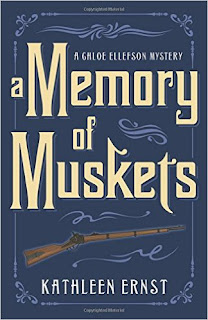 The more Roelke learns about reenacting, the more he fears that a killer will join the ranks at Chloe’s special event. Then Chloe discovers a disturbing secret about Roelke’s Civil War-era ancestors. Together they struggle to solve crimes past and present . . . before Chloe loses her job and another reenactor loses his life.

About the author:
Kathleen Ernst is a former museum curator who remains passionate about history! In addition to the Chloe Ellefson Historic Sites series, she has written many books for American Girl, including nine about the historical character she created, Caroline Abbott. Over 1.5 million copies of Kathleen’s 33 titles have been sold. The Chloe series has earned a LOVEY Award for Best Traditional Mystery, and several of her mysteries for young readers have been finalists for Edgar or Agatha awards.

Guest Post:
Family Stories
By Kathleen Ernst
Are you interested in genealogy? If so, you’re not alone. Experts list only gardening ahead of genealogy in terms of popular hobbies in the United States. It’s also the second busiest category of website. I developed a fascination with family history decades ago. I’m also interested in the broader study of immigrant history, particularly that of people who traveled to Wisconsin and the upper Midwest in the 19th century.

The newest, A Memory of Muskets, is the most personal for Chloe yet. Her guy-friend, cop Roelke McKenna, has just purchased his old family farm. She’s agreed to move in. There’s just one problem: Chloe has the ability to perceive strong emotions that sometimes linger in old buildings, and there are disturbing vibes in what was once the cabin where Roelke’s German-American ancestors made their home.

She’s pretty busy at work, planning Old World Wisconsin’s first Civil War reenactment—and trying to help identify a reenactor found dead at a German-American farm restored to 1860. Nonetheless, she’s determined to discover what caused the distress for Klaus and Rosina, the first of Roelke’s ancestors to arrive in Wisconsin. Readers discover the challenges faced by all settlers who went through the enormous upheaval of immigrating to America, only to see their new homeland erupt in Civil War.

Working on family history has rewards and challenges. It’s exciting to find a new name to add to the tree. On the other hand, the farther back you go, the less likely it is that you’ll find any stories behind the name. And sooner or later, any branch on the tree will simply peter out.

I write fiction in part to satisfy the need to find the stories behind the names. I write mysteries because the quest to solve a murder mirrors perfectly the quest to solve an historical puzzle. The past often informs the present, and Chloe’s historical research skills are as important as Roelke’s investigative abilities.

Are you involved in family history? What discoveries have you made?

Giveaway:
This giveaway is for the US only. The winner will be drawn randomly via rafflecopter. Once the winner has been drawn they will be notified via email and will have 48 hours to respond. If you do not respond a new winner will be chosen. It is mandatory that you leave a comment on this post. This will be verfied and if you do not leave a comment then your entry will be thrown out. Thank you and good luck.
a Rafflecopter giveaway