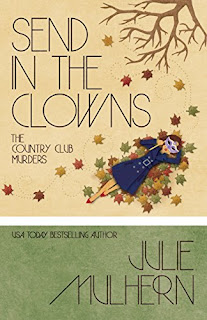 Now death wears a red nose and Ellison is up to the blood-stained collar of her new trench coat in costumes, caffeine, and possible killers. Who stabbed Brooks Harney? And why? Money? Jealousy? Drugs?

With Mother meddling, her father furious, and her date dragged downtown for questioning, turns out Ellison’s only confidante is Mr. Coffee.

About the author:
Julie Mulhern is the USA Today bestselling author of The Country Club Murders. She is a Kansas City native who grew up on a steady diet of Agatha Christie. She spends her spare time whipping up gourmet meals for her family, working out at the gym and finding new ways to keep her house spotlessly clean–and she’s got an active imagination. Truth is–she’s an expert at calling for take-out, she grumbles about walking the dog and the dust bunnies under the bed have grown into dust lions.

Character Guest Post (Frances):
“Frances, you won’t believe what I heard at the club.”
Frances straightened her shoulders. Posture was so important. Young people today just schlumped about in ratty jeans with ratty hair. It was far easier to hear bad news with a straight back, squared shoulders, and a St. John suit. Frances could tell from the malicious edge in Lorna’s voice that bad news was coming. Let it come. She was ready. “What, dear?”
“It’s about Ellison.”
Of course it was. Her youngest daughter enmeshed herself in one disaster after another. “Really?”
“I’m afraid so.” Lorna should at least try to contain her glee.
“Another body?” Nonchalance was the ticket. And, if it wasn’t another body, anything else that might follow was anti-climatic.
“No. Well, not another one. I heard that she was there when Brooks Harney died. I heard he was wearing a clown suit.”
While this wasn’t news, it was news Frances had hoped might go unreported. She made the fingers that held the ear of her tea cup relax. “It was very trying for her. The poor thing has had a run of bad luck.”
“Bad luck? Bad luck is two flat tires. How many bodies has Ellison found?”
Frances didn’t care to add them up. “It’s not as if she’s killed anyone.” That sounded defensive. Damn.
“She ran over her husband.”
“True, but he was already dead.”
“People are beginning to wonder.”
“Are they?” Frances added a healthy dose of ice to her tone.
“Well. I mean…that is to say…where there’s smoke there’s fire.”
It wasn’t anything that she hadn’t told Ellison herself.  But hearing it from Lorna made Frances’ spine stiffen. “Are you suggesting my daughter might be responsible for a murder?”
“No! No. Of course not.”
“Because that’s what it sounds like you’re saying.”
“No. Not at all.” Lorna was backtracking now. “Ellison is a lovely woman. No one would suspect her of murder.”
“I should hope not. And if you hear anyone suggest such a thing, I’m counting on you to set them straight.”
“Of course I will. What are friends for?”
With friends like Lorna, who needed enemies? 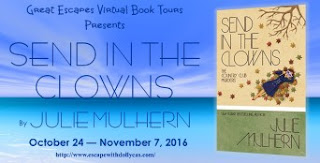