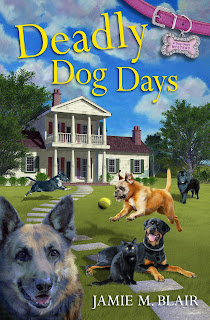 Synopsis:
New to the historic town of Metamora, Indiana, Cameron Cripps-Hayman is looking to make friends with her neighbors. What she isn’t looking for is one of their bodies floating in the canal.

When she and her estranged husband, the town sheriff, are both named suspects for the murder, Cameron takes solving the crime into her own hands, teaming up with her eccentric co-workers who dub themselves The Metamora Action Agency.

As if hunting for a murderer with two high school geniuses, the town drunk, and an elderly kleptomaniac isn’t hard enough, Cameron adopts the five mangy guard dogs of her deceased neighbor. But maybe a stint at playing gatekeeper is just what she needs to come face-to-face with the killer and save another neighbor from being the next victim.

About the author:
Jamie Blair (Ohio) is the award-winning author of young adult and romance books, including Leap of Faith (Simon & Schuster, 2013) and Lost to Me. Visit her online at www.JamieBlairAuthor.com and on Twitter at https://twitter.com/JamieMBlair

Cozy mysteries come in many shapes and forms. Sometimes the amateur sleuth is a baker, a quilter, or a book collector. Mine collects dogs—but not on purpose. If you’re like me and stray animals seem to have a GPS straight to your door, you know how that happens.

Cameron Cripps Hayman, the heroine in my Dog Days Mysteries series, adopts the unruly pack of six guard dogs owned by the murderer’s victim in the first book, Deadly Dog Days. There’s Gus, the giant, laid back Newfoundland; grumpy Isobel, the geriatric German Shepherd; the medium-sized yet-to-be-named twins shaped like tanks who appear to be some type of wiry-haired terriers; Liam the puppy, the teeny, tiny ball of fluff Yorkie/Maltese; and large and in charge Brutus, a snarly Doberman Pincher/Rottweiler mix, prone to bite, who trees cats and howls at the moon.

Writing the different personalities of each dog is a blast. No, they don’t speak, but their actions speak louder than words. Although they were technically guard dogs, not one of them has had any training. They don’t even sit or shake, let alone worry about intruders—especially not Spook, the sly black cat who sneaks into Cam’s house from time to time who the dogs never seem to notice.

And what good would be having dogs in the book if they don’t help solve the crime? They might not be trained, but they sure are loyal!
Giveaway:
a Rafflecopter giveaway 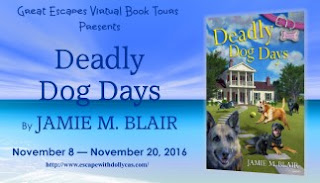