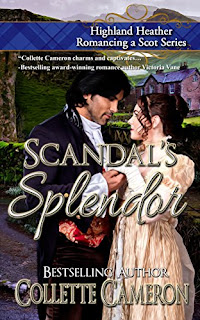 Seonaid Ferguson, a lady of Craiglocky Keep, is through with London’s Marriage Mart. After learning she has the second sight, the haut ton attempts to exploit her abilities. Even though it means she condemns herself to spinsterhood, Seonaid sets a desperate course to rid herself of her gift turned curse. As she rushes home from England, a snowstorm strands her in a crowded inn with the last man she ever wished to see again. A handsome French baron who once thought her a courtesan. And just her misfortune, only he stands between her and certain harm.

Jacques, Monsieur le baron de Devaux-Rousset, ventures to Scotland to oversee his new investment; a silver mine near Craiglocky. Only a handsome profit will save his family's destitute estate in France. But when the mine is beset with one problem after another, Jacques must instead search for an heiress to wed. He certainly should not be falling in love with the lovely, spirited sister of Laird Ewan MacTavish, a lass whose dowry is insufficient to restore his ancestral home. Nor should he consider, even for a moment, her risqué, but deliciously tempting scheme to rid her of the second sight.


A danger most dire

Matters are torn from their hands when a dangerous adversary vows to expose Seonaid as a witch, just as Jacques's problems at the mine escalate into deadly violence. Is it by chance, or a dark design, that both of them are beset at once? Dare Jacques and Seonaid throw caution aside and forge a future together?In this follow-up to the acclaimed military science fiction thriller.

An escapee from the Pacific Northwest’s rainy, gray coast, COLLETTE CAMERON believed teaching her destiny until she dared to tap out her first novel.

She’s been enthralled with writing ever since.

Blessed with three spectacular children, fantastic fans, and a compulsive, over-active, and witty Muse who won’t stop whispering new romantic romps in her ear, she still lives in Oregon with her mini-dachshunds, though she dreams of living in Scotland part-time.

A member of Novelist Inc., Romance Writers of America, as well as several RWA chapters including The Beau Monde, Hearts Through History, Celtic Hearts, Rose City Romance Writers, and the Greater Seattle Romance Writers, Collette admits to a quirky sense of humor, enjoys trivia and inspiring quotes, adores castles and anything cobalt blue, and is a self-confessed Cadbury chocoholic.

Her motto for life? You can’t have too much chocolate, too many hugs, too many flowers, or too many books. She’s thinking about adding shoes to that list.