What the Fly Saw by Frankie Y. Bailey - Spotlight 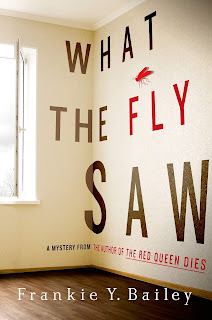 Albany, New York, January 2020
The morning after a blizzard that shut down the city, funeral director Kevin Novak is found dead in the basement of his funeral home. The arrow sticking out of his chest came from his own hunting bow. A loving husband and father and an active member of a local megachurch, Novak had no known enemies. His family and friends say he had been depressed because his best friend died suddenly of a heart attack and Novak blamed himself. But what does his guilt have to do with his death? Maybe nothing, maybe a lot. The minister of the megachurch, the psychiatrist who provides counseling to church members, or the folksy Southern medium who irritates both men—one of these people may know why Novak was murdered. Detective Hannah McCabe and her partner, Mike Baxter, sort through lies and evasions to find the person who killed their “Cock Robin,” But McCabe is distracted by a political controversy involving her family, unanswered questions from another high-profile case, and her own guilt when a young woman dies after McCabe fails to act.

About the author:
Criminologist Frankie Bailey has five books and two published short stories in a mystery series featuring crime historian Lizzie Stuart. The Red Queen Dies, the first book in a near-future police procedural series featuring Detective Hannah McCabe, came out in September, 2013. The second book in the series, What the Fly Saw came out in March 2015. Frankie is a former executive vice president of Mystery Writers of America and a past president of Sisters in Crime.