Death of a Wolfman by Susan Boles - Review 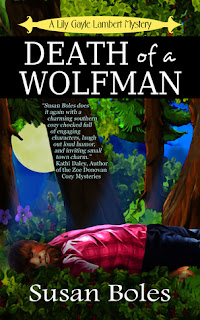 Synopsis:
The first book in the Lily Gayle Lambert Mystery series. Quicker than she can stitch together the threads of a genealogy project she's just signed on to research, Lily Gayle Lambert finds herself embroiled in investigating the murder of a stranger who suffers from 'wolfman syndrome’. And, when a member of a prominent family turns up dead soon after the 'wolfman', Lily Gayle must find the link between the two and solve the mystery before she becomes the next target. Escaping from a trailer in the woods owned by two good ole boys and a confrontation with the eldest son of the town's wealthiest family have Lily Gayle hot on the trail of the killer…much to the consternation of her cousin. Who just happens to be the County Sheriff. With the help of her lifelong best friend, Dixie, and town busybody, Miss Edna, she pieces together the clues leading to a conclusion that shocks the entire town.

My thoughts:
This was a fun start to a new series. What more can you ask for in a mystery book, a small town full of gossips, a dead body or two and more than a few suspects and a fun loving amatuer detective. Susan hit all of these points which makes for a page turning fun time. I also liked the little bit of genealogy thrown in as that is something I enjoy to do. Lily is lucky that she is related to the sheriff or she might find herself in some hot water. She likes to stick her nose where is does not belong since she wants to be the one to solve the case. All in all a good mystery where the author gives you just enough clues to keep you guessing and reading to the end. A good start to a new series.

About the author:
Susan calls McNairy County, TN her home ground even though she has moved away. It was here, at Bethel Springs Junior High School that she began her writing career with two friends. They formed their own little writers group that was so secret they were the only ones who knew it existed. She still has some of the stories they wrote carefully preserved in a loose leaf binder and tucked away for safety.

Reading has been a passion since she was very young. As a toddler, her mother read to her from her 'baby books' and her Mother tells a story about her holding one of them upsidedown and 'reading' by repeating the story verbatim from memory.

Susan writes mysteries set in the big city of Memphis, TN and the fictional small town of Mercy, Mississippi.
Posted by Angela - Bookaunt at Monday, November 07, 2016