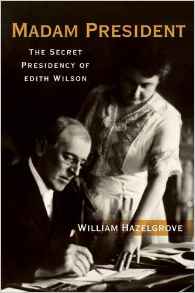 Synopsis:
After President Woodrow Wilson suffered a paralyzing stroke in the fall of 1919, his wife, First Lady Edith Wilson, began to handle the day-to-day responsibilities of the Executive Office. Mrs. Wilson had had little formal education and had only been married to President Wilson for four years; yet, in the tenuous peace following the end of World War I, Mrs. Wilson dedicated herself to managing the office of the President, reading all correspondence intended for her bedridden husband. Though her Oval Office authority was acknowledged in Washington, D.C. circles at the time--one senator called her "the Presidentress who had fulfilled the dream of suffragettes by changing her title from First Lady to Acting First Man"--her legacy as "First Woman President" is now largely forgotten.

William Hazelgrove's Madam President is a vivid, engaging portrait of the woman who became the acting President of the United States in 1919, months before women officially won the right to vote. Movie Rights Optioned by Storyline Entertainment.


For More Information
Madam President: The Secret Presidency of Edith Wilson is available at Amazon.
Pick up your copy at Barnes & Noble.
Discuss this book at PUYB Virtual Book Club at Goodreads.

Book Excerpt:
She was from the South and had two years of formal schooling and wrote like a child. She married a quiet man from Washington and her baby died after three months. Her husband then died and left her with a failing jewelry company that was severely in debt. She turned the company around while taking almost no salary. She bought an electric car and was issued the first driver’s license given to a woman in the District of Columbia. She married a President who had been recently widowed. In four years, the President would have a severe stroke, and leave her to run the Unites States Government and negotiate the end of World War I.

She was our First Woman President.


About the Author
William Elliott Hazelgrove is the best-selling author of thirteen novels, Ripples, Tobacco Sticks, Mica Highways, Rocket Man, The Pitcher, Real Santa, Jackpine and The Pitcher 2. His books have received starred reviews in Publisher Weekly and Booklist, Book of the Month Selections, Junior Library Guild Selections, ALA Editors Choice Awards and optioned for the movies. He was the Ernest Hemingway Writer in Residence where he wrote in the attic of Ernest Hemingway's birthplace. He has written articles and reviews for USA Today and other publications. He has been the subject of interviews in NPR's All Things Considered along with features in The New York Times, LA Times, Chicago Tribune, Chicago Sun Times, Richmond Times Dispatch, USA Today, People, Channel 11, NBC, WBEZ, WGN. The Pitcher is a Junior Library Guild Selection and was chosen Book of the Year by Books and Authors. net. His next book Jackpine will be out Spring 2014 with Koehler Books. A follow up novel Real Santa will be out fall of 2014. Madam President The Secret Presidency of Edith Wilson will be out Fall 2016. Storyline optioned the movie rights. Forging a President How the West Created Teddy Roosevelt will be out May 2017.

He runs a political cultural blog, The View From Hemingway's Attic.


Guest Post:
What You Don't Know About Our First Woman President

She was from the South. Her name was Edith Bolling Wilson and married Presidnet Woodrow Wilson after his wife Ellen Wilson died. They were only married four years and then Woodrow had a massive stroke and Edith took over the White House. This was in 1919 and from here on Edith Wilson ran the government until 1921. She had only two years of school and had run a successful jewelry company after her first husband died. She owned one of the first electric cars in Washington and was given the first drivers license in the District of Columbia. She was fifteen years younger than Woodrow Wilson and considered very attractive.

They necked in the presidential limousine when they were courting. Edith deciphered top secret codes for the President. When he had a stroke she controlled who saw him and who didn't. She oversaw legislation and secured appointments for his cabinet. All this while her husband was on deaths door and many thought he would die. She saw the Vice President only once and told him his services weren't needed. She oversaw the end of World War I and was in the middle of the fight to get the United States into the League of Nations.

She would show her husband movies and wheel him outside to the South Portico for air. She had him put in the presidential limousine and propped up so people would know he was still alive. She outlived him by forty years and was at John Kennedy's inauguration. She wrote a memoir in 1939 and denied running the White House. In the National Archives are correspondence that was never opened during her Presidency and discovered in the 1950s. She just couldn't get to it.

She was our first woman President and has never been recognized for her service to the country.

Email ThisBlogThis!Share to TwitterShare to FacebookShare to Pinterest
Labels: Biography, Pump up your book