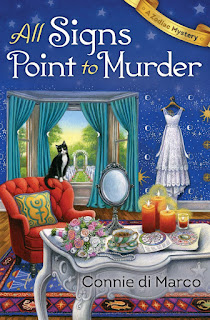 Book details:
All Signs Point to Murder (A Zodiac Mystery)

Julia Bonatti is alarmed by the astrological signs looming over Geneva Leary’s wedding day, but nobody asked Julia’s opinion and being a bridesmaid means supporting the bride no matter what. Even with the foreboding Moon-Mars-Pluto lineup in the heavens, no one’s prepared for the catastrophes that strike: a no-show sister, a passed-out wedding planner, and a lethal shooting in the dead of night.

With anger and grief threatening to tear the Leary family part, Julia is determined to understand how such a terrible tragedy could occur. As she digs deeper into the family’s secrets, her astrological insights will lead her to the truth about a criminal enterprise that stretches far beyond the California coast.

Meet the author - Connie di Marco
Connie di Marco is the author of the Zodiac Mysteries from Midnight Ink, featuring San Francisco astrologer, Julia Bonatti. The first in the series, The Madness of Mercury

, was released in June 2016 and the second, All Signs Point to Murder

Writing as Connie Archer, she is also the national bestselling author of the Soup Lover’s Mystery series from Berkley Prime Crime. Some of her favorite recipes can be found in The Cozy Cookbook

and The Mystery Writers of America Cookbook

. Connie is a member of International Thriller Writers, Mystery Writers of America and Sisters in Crime.

When I first thought of writing the Zodiac Mysteries, featuring San Francisco astrologer Julia Bonatti, I knew that the city itself, its history, its atmosphere, its constantly changing faces should play a big part in Julia’s world. And one of the most important features of San Francisco is its fog, especially where Julia lives on the outer avenues close to Land’s End and the Pacific.

Julia doesn’t mind the billows of fog that arrive almost every day around three o’clock in the afternoon. She loves the way it carries the smells of the sea and the silence it creates. She adores the mist on her face and the way it softens the hard contours of buildings. And she particularly loves the deep voices of the foghorns as they lull her to sleep at night.

What causes all that fog? Well, California’s very hot in the summer months, while San Francisco is perched on a peninsula at the edge of the continent surrounded by water, water that brings freezing cold Alaskan currents. When the cold air of the ocean meets the rising inland heat, fog is formed and it occurs most heavily in the months from July through October.

For many years, the compressed air horns under the Golden Gate Bridge sounded with deep two-tone baritone voices. There were two fog horns on the south tower of the Golden Gate Bridge that made a single blast every twenty seconds, while a mid-channel foghorn sounded two blasts every forty seconds. During the foggy season, July through October, they sound more than five hours a day.

But nothing lasts forever and in the mid 1970’s the two-tone horn at mid span stopped working. Replacement parts were impossible to find. So for the next ten years, only a one-tone horn continued to sound. Eventually that horn too began to show signs of wear and tear and had to be replaced. The replacement horns are one-tone horns that differ in frequency but operate with compressed air, like the originals. Each horn has a different pitch and marine navigational charts give the frequency or signature of each.

Then, in 1992, the Coast Guard decided to stop operating the fog horns and replaced them with electronic signals! Romantics of the city arose and protested loudly until the horns were finally reinstituted. You can listen to them here: http://www.postcard.org/foghorn.htm. They don’t quite sound the same as the originals but they still lull Julia to sleep at night and their voices can be heard in the city once again. 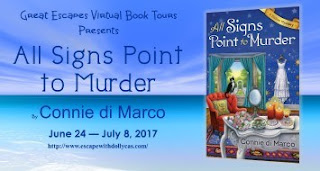