No Turning Back by Tracy Buchanan - Spotlight, Guest Post and Giveaway

Book details:
No Turning Back: A Novel

About this book:
Anna Graves’s whole life has recently been turned upside down. A new mother, she’s just gone back to her job as a radio presenter and is busy navigating a new schedule of late night feeding and early morning wake ups while also dealing with her newly separated husband. Then the worst happens. While Anna is walking on the beach with her daughter, she’s attacked by a crazed teenager. Terrified, Anna reacts instinctively to protect her baby.

But her life falls apart when the schoolboy dies from his injuries. The police believe Anna’s story, until the autopsy results reveal something more sinister. A frenzied media attack sends Anna into a spiral of self-doubt. Her precarious mental state is further threatened when she receives a chilling message from someone claiming to be the “Ophelia Killer,” a serial killer who preyed on the town twenty years ago—and who abruptly stopped when Anna’s father committed suicide.

Is Anna as innocent as she claims? And is murder forgivable, if committed to save your child’s life? Internationally bestselling author Tracy Buchanan takes readers on an emotional roller coaster ride filled with heart-stopping secrets and hairpin turns in No Turning Back, her US debut.

Meet the author - Tracy Buchanan:
Tracy Buchanan lives in the UK with her husband, their little girl and their one-eyed Jack Russell. Buchanan traveled extensively while working as a travel magazine editor and has always been drawn to the sea after spending her childhood holidays on the coast visiting family–a fascination that inspires her writing. She now dedicates her time to writing and procrastinating on Twitter.

Guest Post:
The dark thoughts that inspired my novel by Tracy Buchanan

When authors are asked what inspired them to write their novels, many of them have a pleasant story to tell. A gorgeous holiday somewhere. A childhood romance. A dog-eared book found in a library.

Not for me. I came up with the idea for my latest novel, No Turning Back, when fearing the worst happening to my baby girl.

That sounds awful, doesn’t it? But I think some of the parents reading this might identify with me.

Maybe you’ve walked downstairs, your baby in your arms, and a quick image of you tripping and your child tumbling from your arms hits you? Or maybe you’re chopping some veg, your toddler playing on the floor and you suddenly imagine losing grip of your knife, see it falling towards your child?

These are the kind of unwelcome thoughts that plague many parents. The sort of thoughts you squeeze your eyes to shut out, curl your fists to drive away. But they are there and they have a name.

And you know what? They’re completely normal, tied into that parental instinct to protect. We are wired to imagine the worst in order to prepare for the worst. Some say these intrusive thoughts are a clever biological trick to keep the human race rolling.

Of course, like any psychological anomaly, they have a scale, from the tame to the mentally destructive. Luckily, mine are closer to the tame end. I usually find myself contending with them when I’m tired or stressed. Like a dark cloud, they pass as quickly as they come. But they’re still there, hovering in the distance.

And it was one of those intrusive thoughts that led to the idea of No Turning Back. I was walking my newborn through a park one glorious summer day and a perfectly innocent looking man approached us. Suddenly, I imagined him lunging towards my daughter with a knife. I had to clutch the handles of my pram very hard to stop myself screaming at him to leave us alone!

He passed by with no drama and for the rest of the walk, I started to wonder: ‘what if he had attacked us? What would I have done?’ I remembered the red rattail comb in my bag. Yes, that’s what I would have done. I would have used it to defend my child.

But then another question bubbled up. Would I kill for my child in such a situation? Most people say they would, unquestionably. But that takes something, killing someone. Wounding them, yes. But killing them? Maybe you need a certain type of darkness inside to take someone’s life, even when protecting your own child.

It’s this that forms the heart of No Turning Back. In it, the main character Anna is walking her child along the beach and a schoolboy attacks her and her baby girl. In self-defence, she kills him with her comb. At first, she’s hailed a hero. But as the public turn against her, we begin to question if Anna has a darkness in her. Is she as innocent as she claims?

And is murder forgivable, even if it’s committed to save your child’s life…? 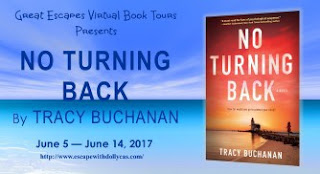