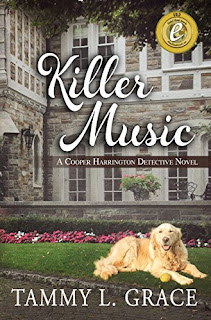 The suspects are plentiful. More than a handful of people could have wanted him dead. Retained by Taylor’s widow, Coop works alongside his best friend and Chief of Detectives, Ben Mason. The investigation leads Coop and Ben to visit the luxurious mansions of recording industry magnates, navigate the murky undercurrents of the political world, and probe complicated family matters. Scandalous indiscretions, secrets, and hints of corruption swirl in the midst of their pursuit of the killer.

Coop’s faithful friend and assistant, Annabelle and his loyal golden retriever, Gus, both lend a hand during the investigation. Even his Aunt Camille mines the local gossip mill to unearth potential killers with motive. Yet the case seems hopeless until a crucial piece of evidence emerges that sends Coop and Ben on a race to catch the killer before someone else dies.

Born and raised in Nevada, Tammy L. Grace loved reading at a young age. With the help of her middle school teacher, she discovered the joy of writing. When Tammy isn’t working on ideas for a novel, she’s spending time with family and friends or supporting her addiction to books and chocolate. She and her husband have one grown son and a spoiled golden retriever.


Guest Post:
The Making of a Mystery
Tammy L. Grace

Writing two series, one being a mystery and the other women’s fiction, often leads readers to ask me which is my favorite. It’s a tough choice because I do feel a real connection to the characters in all my books, but if I am forced to choose, it would be the mystery series.

I’ve always been a fan of mystery novels. I love puzzles and brain teasers. I just recently learned about puzzle rooms and can’t wait to try one of them. If you haven’t heard of them, they consist of a live game played with a group and the object is to escape a locked room using clues found in the room. I wish I would have thought of this! I think I need to work it into a novel soon.

My dad became a police officer when I was a very young child, so I’ve always been exposed to stories of criminal disobedience. We live in a small town, so the crimes are not at the level of the horror visible on the news each night, but we’ve had a few murders and a never-ending supply of entertaining mischief.

When I’m working on plot ideas I always brainstorm with my dad and get his input on the various aspects of the crime. He’s now serving as a judge pro tem, so I also pick his brain for questions related to the law. I like to keep the story as realistic as possible and his expertise is always valuable.

When I was developing the characters for the Cooper Harrington Detective Series, I wanted an actual detective, not the amateur character who stumbles upon dead people constantly. Not to say I don’t enjoy those types of stories, but some of them can become juvenile quickly. I didn’t want to walk that line between entertaining and just downright annoying. My detective emerged from visions of characters I enjoy from movies, television, books, and even real life, along with my own twists on some quirky traits.

Coop, as he’s known to all his friends, is a forty-something bachelor who suffers from chronic insomnia and mainlines caffeine. His uncle was a police detective who retired and opened his own private investigation agency where Coop worked as a college student. When his uncle dies, Coop takes over the business. He lives with his aunt in a posh neighborhood in Nashville. Aunt Camille fills the goofy character role perfectly. She’s well-meaning, but a bit nosy and loves to be involved in Coop’s cases.

Along with his human colleagues, Coop also has a canine companion named Gus. I feature dogs in all my books and Gus is a beautiful golden retriever who goes to work with Coop and accompanies him on his cases. Gus has his humans trained much like my dog has trained me.

I’m always asked if Coop and AB will get together, romantically. The answer is I have no plans to make them a couple. Many good male and female detective or police combo have been ruined when the characters become a romantic duo. Just my opinion, but I like the tension when the reader or viewer knows they would be “perfect” for each other, but the characters are oblivious. I enjoy the plot and mystery in these novels and would rather not complicate it with the hassle of a love interest.

Killer Music is the first in this series and is an award-wining mystery. I have a notebook filled with ideas for future cases for Coop. Although the books can be read as stand-alone novels, they’re a series for a reason, so I recommend starting with Killer Music. Deadly Connection, the second book, was published in 2016 and I plan to have the third one out in 2018.

If you enjoy fast-paced whodunits that are on the cozy side, you’ll love the Cooper Harrington Detective Novels. I hope you enjoy them and if you do, please consider leaving a review on Amazon…it’s the best way to let an author know you enjoy her work. I invite you to connect with me on my mailing list. You’ll get free content emailed to you just for subscribing and be the first to know about my latest book news, blogs, offers, and contests. Sign up at my website at www.tammylgrace.com. 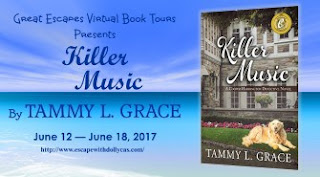