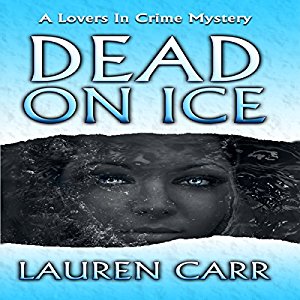 About this book:
Dead on Ice is the first installment of Lauren Carr’s new series (Lovers in Crime) featuring Hancock County Prosecuting Attorney Joshua Thornton and Pennsylvania State Police homicide detective Cameron Gates. Spunky Cameron Gates is tasked with solving the murder of Cherry Pickens, a legendary star of pornographic films, whose body turns up in an abandoned freezer. The case has a personal connection to her lover, Joshua Thornton, because the freezer was located in his cousin’s basement. It doesn’t take long for their investigation to reveal that the risqué star’s roots were buried in their rural Ohio Valley community, something that Cherry had kept off her show business bio. She should have kept her hometown off her road map, too—because when this starlet came running home from the mob, it proved to be a fatal homecoming.

Book reviewers and readers alike rave about how Lauren Carr’s seamlessly crosses genres to include mystery, suspense, romance, and humor.

Lauren is a popular speaker who has made appearances at schools, youth groups, and on author panels at conventions. She lives with her husband and three dogs (including the real Gnarly’s klutzy nephew Sterling) on a mountain in Harpers Ferry, WV.

My thoughts:
I thought this was an interesting book to listen to. The mystery part had me trying to guess what would happen next. In fact there were multiple murders that you had to try and piece together as the story went along. I really enjoyed Irving and his interactions with the characters. It is kind of funny that he is Cameron's ride along. There were just enough twists to keep me guessing. A good start to a new to me series.

So you want to be a writer?

Maybe you have “write a book” on your bucket list. Or maybe you’ve had a story idea floating around in your head. Or maybe, just maybe, you have a personal story that you just need to tell the world about.

Whatever the case, you want to give this writing thing a crack, but other than sitting down at a laptop or keyboard and typing out words to form sentences, you aren’t quite sure what to do to complete not just a book, but a book that someone will want to read from beginning to “the end.”

1) Become a Reader. Some writers, especially those who don’t have much time, can easily slip into the routine of writing, but not reading other writers’ works. This is a mistake. Just like how athletes watch others to study routines and techniques, you can learn from reading other writers’ books—even bad ones.

I had a friend who had an issue with how she handled backstory. I had explained the issue to her more than once, but she didn’t get it until she read a book by a writer who had the exact same issue. As soon as she saw another writer do it, she realized exactly what I had been telling her. That fixed it.

2) Commit Yourself. No, I don’t mean check yourself into a mental hospital because you’re crazy for even thinking of being a writer (though I do have some relatives who might disagree with me on that). I mean, commit yourself to not just starting to write a book, but finishing it.

I’m telling you right up front that if you want to write a book, there is going to be a point (usually around page 40) where it’s not going to be fun anymore. If you are serious, then you need to make a commitment of working on it even when it is not fun anymore.

3) Make Time for Writing. If your lifestyle is like most of ours, you have a busy life with a real job, family and friends. Part of making a commitment to being a writer is making time to actually write. You are not going to be able to write a whole book by typing out a sentence here and there during commercials while watching television. You need to carve out at least a couple of hours of time to devote to it. There are a ton of articles on the Internet about how to make time for writing. Check them out.

4) Write Every Day. Even when the words aren’t coming easily. You’ll be surprised how much good stuff you will end up keeping, even though they did not seem that great when you composed them. Writing is a skill. As with any skill, it improves with practice.

5) Set Deadlines. I find that I write more and better when I have a deadline. But make your deadline realistic. Unrealistic deadlines (like to write your whole book during your one week vacation) will only frustrate you. A good deadline is 500 words a day. There are many writer websites and communities where you can join other writers to hold each other accountable to write every day.

6) Make Your Readers Care About Your Characters. Have you ever read a book and gotten up to page twenty or so and thought, “I don’t care what happens to any of these characters?” At which point, you stop reading. You need to make your readers care about what happens to your characters from the very beginning. You do that by giving them some redeeming qualities.

I once edited a book which opened with the protagonist raping a woman. The story was about the transformation of this character from a despicable evil man into a born-again Christian. Unfortunately, the main character had no redeeming qualities until that transformation more than halfway through the book. Therefore, the reader wasn’t going to care enough about him to read beyond the opening chapter.

On my suggestion, the writer inserted a prologue of his protagonist on his deathbed, giving the reader a view of him after his transformation, making him more sympathetic to the reader. Then, the rest of the book became a reflection of his life.

7) Do Your Research. I once read a murder mystery, set in present day, in which the detective arrives at a murder scene, takes a deep drag on his cigarette, and then tosses it down next to the dead body. It wasn’t just as mystery writer that I screamed, “No!” Any fourth grader knows nowadays that the detective had contaminated the murder scene.

Failure to do proper research can make writers lose credibility with their readers. Many new writers refrain from research because they fear that it will squelch their imagination. On the contrary, research can open other doors for possibilities that you may never have imagined. For example, in my Thorny Rose Mysteries, I have a “character” named Nigel, the smart house computer who provides security and other services for Jessica Faraday and Murphy Thornton. Every technical service that Nigel performs in the Thorny Rose mysteries is available with today’s technology. My inspiration for Nigel came while researching smart houses and home security for the rich to include in the Faraday-Thornton home. As I learned more, a few simple computerized devices grew into a whole intriguing character who has become a fan favorite.

8) Use Adjectives And Adverbs Sparingly. Writing legend Elmore Leonard said in his Ten Tips for Writing to not use -ly words at all. While I don’t refuse to use them at all, I try to keep away from them. YMost of these descriptive words are cliché and can make your writing seem amateurish. Not only that, but if you think about the passage where you are sticking that word, you will find that the context itself will describe the scene, making the word unnecessary. For example, if your scene is a couple fighting after the wife has discovered that her husband is cheating on her, then you don’t need to tag their statements with the word “angrily.” The reader is going to know that the wife is angry.

9) Kill Your Darlings. The point to this tip is to make sure every section and chapter moves your reader toward the conclusion. Portions of books that fail to do this are called “darlings” because brilliantly written passages are like children to most writers. They become your darlings and unfortunately every good writer has to kill a few to save the whole book. As you become more accomplished at writing, you will come to recognize darlings before you take the time to create them.

The beauty of the digital age is that you can save your darlings and put them in a “cut scenes” file to use in a future project. A large portion of my third Mac Faraday mystery, Shades of Murder, is made up of a subplot that I had cut from an earlier book.

10) Get Out of the House. Now that I have told you to commit to your book and to write every day, I’m telling you to get out into the world and meet people. Writing can become a solitary exercise and it is very easy to get sucked into your literary world to the point that you don’t get out to experience life. I have that problem myself. Sometimes, my husband has to drag me away from the laptop, leave my characters in the middle of a gun fight, and go to lunch.

Walking away from your laptop does make you a better writer. It is a big world out there filled with interesting characters and a planet filled with inspiration. Even if you already have your plotline written in your head, who knows, you may see an intriguing character sitting across from you at the diner who will be the perfect red herring in your plot twist.

So there’s ten writing tips to get you started on that book. The only question now is “What are you waiting for?”