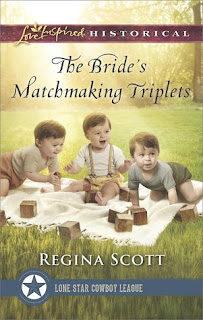 About the book:
Marriage by Necessity

When mail-order bride Elizabeth Dumont's intended weds another, her only option is to take a job as nanny to abandoned triplet babies. Though she longs to provide a real home for her three precious charges, as a single woman she can't adopt. Until her onetime sweetheart, minister Brandon Stillwater, offers a match of convenience...

It's only for the triplets' sake--that's what Brandon tells himself. Insecurities once drove him and Elizabeth apart, and now small-town rumors have made them man and wife. And though Brandon doesn't want to risk his heart this time, he's not sure he can resist the feelings that are once again starting to bloom for Elizabeth. But can he convince her that this sweet surprise family is more than just convenient?

Meet the author: Regina Scott
Regina Scott started writing novels in the third grade. Thankfully for literature as we know it, she didn’t actually sell her first novel until she had learned a bit more about writing. Since her first book was published in 1998, her stories have traveled the globe, with translations in many languages including Dutch, German, Italian, and Portuguese. She and her husband of over 25 years reside in southeast Washington State.

My thoughts:
I have to say I really enjoyed this book. The little triplets - Theo, Jasper and Eli were the cutest boys. It was so fun to watch their personalities come out as the book went along. Elizabeth was such a great character to get to know. I felt bad for her as her best friend really did her wrong and caused her to lose the love of her life and she does not even realize it. In a way I wish her and Brandon would have actually talked to each other about this to realize what happened. Brandon was such a sweet person. Seeing the boys bring these two together was nice. I was on the edge of my seat when the triplets "relatives" showed up. Oh and I can't forget Gil and Jo they were such a sweet addition to this story and to learn about their love for the triplets was so cute. I am glad I got the chance to read this book.
Posted by Angela - Bookaunt at Tuesday, June 06, 2017