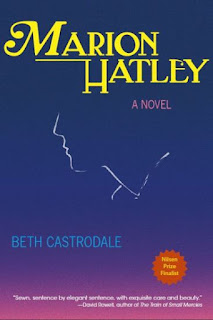 About this book:
To escape a big-city scandal, a Depression-era lingerie seamstress flees to the countryside, where she hopes to live and work in peace. Instead, she finds herself unraveling uncomfortable secrets about herself and those closest to her.

In February of 1931, Marion Hatley steps off a train and into the small town of Cooper’s Ford, hoping she’s left her big-city problems behind. She plans to trade the bustling hubbub of a Pittsburgh lingerie shop for the orderly life of a village schoolteacher. More significantly, she believes she’ll be trading her reputation-tainting affair with a married man for the dutiful quiet of tending to her sick aunt. Underpinning her hopes for Cooper’s Ford is Marion’s dream of bringing the daily, private trials of all corset-wearing women—especially working women—to an end, and a beautiful one at that.

Instead, she confronts new challenges: a mysteriously troubled student; frustrations in attempts to create a truly comfortable corset; and, most daunting, her ailing aunt. Once a virtual stranger to Marion, her aunt holds the key to old secrets whose revelation could change the way Marion sees her family and herself.

As her problems from Pittsburgh threaten to resurface in Cooper’s Ford, Marion finds herself racing against time to learn the truth behind these secrets and to get to the bottom of her student’s troubles. Meanwhile, Marion forms a bond with a local war veteran. But her past, and his, may be too much to sustain a second chance at happiness.

“Like Marion Hatley’s own creations, Beth Castrodale’s début novel is sewn, sentence by elegant sentence, with exquisite care and beauty.” — David Rowell, author of The Train of Small Mercies

Meet the author - Beth Castrodale
Beth Castrodale started out as a newspaper reporter and editor, then transitioned to book publishing, serving for many years as an editor for an academic press. She has completed three novels: Marion Hatley, a finalist for a 2014 Nilsen Prize for a First Novel from Southeast Missouri State University Press (to be published in April 2017 by Garland Press); Gold River; and In This Ground, an excerpt of which was a shortlist finalist for a 2014 William Faulkner – William Wisdom Creative Writing Award. Beth recommends literary fiction on her website SmallPressPicks.com, and she has published stories in Printer’s Devil Review, The Writing Disorder, Marathon Literary Review, and Mulberry Fork Review. She lives in Jamaica Plain, Massachusetts.


Giveaway:
During the Blog Tour we will be giving away TWO $25 Barnes and Noble Gift Card! To enter, please enter via the Gleam form below.

Giveaway Rules
– Giveaway ends at 11:59pm EST on July 19th. You must be 18 or older to enter.
– Giveaway is open to residents in the US only.
– Only one entry per household.
– All giveaway entrants agree to be honest and not cheat the systems; any suspect of fraud is decided upon by blog/site owner and the sponsor, and entrants may be disqualified at our discretion.
– Winner has 48 hours to claim prize or new winner is chosen.

Monday, July 3
Review at A Chick Who Reads

Friday, July 14
Review at Jorie Loves a Story
Spotlight at The Never-Ending Book

Wednesday, July 19
Spotlight at Passages to the Past