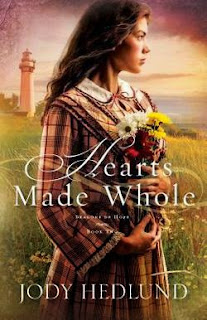 Synopsis:
After her father’s death, Caroline Taylor has grown confident running the Windmill Point Lighthouse. But in 1865 Michigan, women aren’t supposed to have such roles, so it’s only a matter of time before the lighthouse inspector appoints a new keeper–even though Caroline has nowhere else to go and no other job available to her.Ryan Chambers is a Civil War veteran still haunted by the horrors of battle. He’s been given the post as lighthouse keeper, and the isolation where he can drown in drink and hide from his past is appealing. He’s not expecting the current keeper to be a feisty and beautiful woman who’s none-too-pleased to be giving up her position. They both quickly realize he’s in no shape to run the lighthouse, but Ryan’s unwilling to let anyone close, ravaged by memories and guilt. Caroline’s drawn to this wounded soul, but with both of them relying on that single position, can they look past their loss to a future filled with hope…and possibly love?

Review:
This book appealed to me for two reasons right up front. The first was that is takes place in the 1800s which has always been one of my favorite time periods to read about. Second I love lighthouses and all things to do with them so since this story takes place around the lighthouse I jumped at the chance to get to read it. Thank you Jody for combing two of my favorite things.
I really liked Caroline from the beginning. She is a strong woman doing a job that in that time period women were not supposed to do and doing it well. Also I did like Ryan even though he was struggling with his own demons. I like the chemistry between these two characters and how their relationship builds. They kind of play off of each other throughout the entire story.  Jody does a good job of dealing with real problems like addiction and terminal illness. Both the character development and the scene descriptions were done very well and make you feel a part of the story.


About the author:
Jody Hedlund is an award-winning and bestselling historical fiction author. She won the 2011 Inspirational Reader's Choice Award, the 2011 Award of Excellence from the Colorado Romance Writers and was a finalist for Best Debut Novel in the 2011 ACFW Carol Awards. Currently she makes her home in central Michigan, with her husband and five busy children. She loves hearing from readers on Facebook and on her blog.

Be sure to stop by Litfuse Group to see all the stops of the tour and to find out more about the book.

Celebrate the release of Hearts Made Whole by entering to win an Afternoon at the Beach prize pack and RSVPing to Jody's June 23rd author chat party!

One grand prize winner will receive:

One second-place winner will receive:

One third-place winner will receive:

Enter today by clicking the icon below. But hurry, the giveaway ends on June 23rd.Winner will be announced June 23rd at Jody's Facebook party. RSVP here!