Sisters of Shiloh by Kathy and Becky Hepinstall 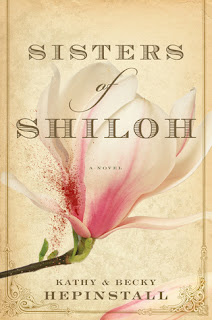 Synopsis:
A best-selling novelist enlists her own sister to bring us the story of two Southern sisters, disguised as men, who join the Confederate Army—one seeking vengeance on the battlefield, the other finding love.In a war pitting brother against brother, two sisters choose their own battle.Joseph and Thomas are fresh recruits for the Confederate Army, daring to join the wild fray that has become the seemingly endless Civil War, sharing everything with their fellow soldiers—except the secret that would mean their undoing: they are sisters.Before the war, Joseph and Thomas were Josephine and Libby. But that bloodiest battle, Antietam, leaves Libby to find her husband, Arden, dead. She vows vengeance, dons Arden’s clothes, and sneaks off to enlist with the Stonewall Brigade, swearing to kill one Yankee for every year of his too-short life. Desperate to protect her grief-crazed sister, Josephine insists on joining her. Surrounded by flying bullets, deprivation, and illness, the sisters are found by other dangers: Libby is hurtling toward madness, haunted and urged on by her husband’s ghost; Josephine is falling in love with a fellow soldier. She lives in fear both of revealing their disguise and of losing her first love before she can make her heart known to him.

Review:
When I first started reading this book I thought "I am not sure I am going to like this book". The reason for this was I thought it was a little depressing. Well I am glad that I gave the book a shot and continued reading it. After getting into the story I decided that it was not depressing but rather had a deep story to tell. The more I got into the story the more I did not want to put this book down. In fact when I came to the end I found myself wishing it was just a little longer as I wanted more of Josephine's story. Both Libby and Josephine were such strong women but their bond as sisters was even stronger. Libby's love for her husband drove her to join the Stonewall Brigade to avenge his death. Josephine was not about to let her sister go without her as she was determined to protect her. The journey these two went on was such a hard journey not only physically but emotionally. I liked "meeting" the men in their regiment and how they became like a family together. The struggles these soldiers went through is beyond belief. I don't want to give to much away about Josephine falling in love with a soldier but I found myself cheering her on and wanting her to find her own happiness. I think these two authors did such a good job of not only telling a story but in making it so real. Their descriptions of the battlefields and wounds were so vivid that even though you did not want to see them you could imagine them in your mind. I could almost smell the smells and hear the sounds. It takes a good writer to make you feel this way and I think these two nailed it.  I will be recommending this book to lovers of history.
Posted by Angela - Bookaunt at Sunday, June 07, 2015