interview with Jody Hedlund - Author of Hearts Made Whole - Part One 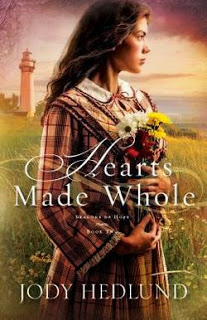 1. How did you come up with the idea for Hearts Made Whole?
Historical textbooks are full of stories about men like George Washington, Thomas Edison, Andrew Carnegie, and so many more.  And while such men are truly remarkable, all too often their stories overshadow equally courageous and remarkable women. One of my goals as an author is to help bring forgotten women of the past to life.

In the Beacons of Hope series, I'm focusing on historical women light keepers who have often been kept in the dark by the more prominent stories of their male counterparts.

As I researched for writing a lighthouse series, I came across a fantastic book called, Ladies of the Lights: Michigan Women in the U.S. Lighthouse Service. The book is a tribute to the approximately 50 or so women who served either as primary or assistant keepers in Michigan Lighthouses.

I based the heroine in Hearts Made Whole on one of those women light keepers. It's my hope to bring her and the other women keepers out of the historical shadows and into the spotlight.

2. What is the story about and who are the main characters?
This story is set at a lighthouse in southern Michigan on Lake St. Clair where the heroine, Caroline Taylor, is the acting light keeper. However, in the time directly following the Civil War, women weren't allowed to be light keepers if a man was available instead. Men were almost always given precedence.

Along comes the wounded war hero, Ryan Chambers, who having a little bit of lighthouse experience is looking for a place where he can be isolated and nurse his physical and emotional wounds.

Of course, when the two meet, they're both competing for the same job. Caroline needs to stay in the position in order to provide for her four younger siblings. And Ryan needs the job so that he can save to repay his war debts.

As is always true for my books, when the hero and heroine meet both danger and romance abound!

3. Each of your lighthouse books is set at a real lighthouse that once existed in Michigan or still does exist. Tell us a little about the lighthouse in this second book.
In my first lighthouse book (Love Unexpected), the lighthouse was set at Presque Isle which is on Lake Huron on the north eastern side of the state. For the second book, I picked a lighthouse in a completely new location with the intention of giving readers a different flavor of climate, geography, and the population.

Windmill Point Lighthouse once existed on Lake St. Clair near Detroit, a much more urban and highly trafficked area than the remote wilderness of Presque Isle. Windmill Point Lighthouse was a strategic beacon that helped ships cross from Lake Huron over into Lake Erie as those ships transported raw goods from the Northwest states to eastern cities and seaports.

The lighthouse is named after the old ruins of a windmill where early frontiersmen brought their grain for grinding. Also, legends attribute the area to being an old battle field of a savage encounter between the early French settlers and Indians. As many as 1000 Fox Indians were slaughtered on the banks of Lake St. Clair. Later settlers to the area uncovered bones, arrowheads, tomahawks, and other gruesome mementos of the battle.

Today, all traces of the original windmill, lighthouse, and burial grounds are long gone. If you visit Grosse Pointe in the Detroit area, all that remains is a small conical structure with a white flashing light.

4. Is there anything about this second lighthouse book that ties it to the first one? Or are they both stand alone novels that can be read in any order?
All of the books in the Beacon of Hope series can stand alone. Readers don't need to read one book to understand the next. However, I do recommend starting with the novella, Out of the Storm (free in ebook format) which lays the foundation for a common theme that stretches through each book in the series.

Caroline's husband served with honor in the Union army during the Civil War, losing several fingers on his hand at Gettysburg. Eventually after returning from the war, her husband was named as keeper of the Mamajuda Lighthouse, but he passed away of tuberculosis.

Part of what really impressed me about Caroline Antaya's situation was that she had been doing a fantastic job as a light keeper. But the district lighthouse inspector trumped up charges against her saying that she was in ill-health and incompetent. He took away her position simply because she was a woman and gave it to a man instead. Fortunately, her community rose to her defense and enlisted the help of a Michigan Senator to help her get her position back and she went on to serve as a light keeper for another three years.
In those days, when women were regularly discriminated against because of gender, Caroline's story is inspirational and an encouragement to persevere in the face of injustice. I admired Caroline's will to stand up for herself and to pave the way for women coming after her to use their God-given talents and abilities in roles and jobs that had previously been closed to women.

6. You also like to base your villains on real Michigan criminals. Who inspired the villain in Hearts Made Whole?
The villain in Hearts Made Whole is Stephen Simmons, a real rogue from the pages of Michigan history. While he lived in the early 1800's in the decades before the Civil War, I used this villain as the basis for Mr. Simmons in the book. He had a tavern outside of Detroit and was a Goliath-of-a-man. At first he gave the impression of being cultured and educated. But once people got to know him, they realized what a brute he really was.

The community where Simmons lived grew to fear him because when he was under the influence of alcohol, he searched out his enemies, picked fights, and inflicted painful beatings. Eventually he killed his wife in a drunken rage.

7. Which scene in Hearts Made Whole was the most fun to write? Which was the hardest?
My favorite scene to write was the shaving scene, where Ryan is attempting to shave himself one-handed (due to his war injury), and he ends up doing a terrible job! Caroline offers to help him which leads to a very romantic scene of her lathering him up and having to spend plenty of time in close proximity.

The hardest part of the book to write was the scene where Caroline's sister Tessa makes a BIG mistake (I can't mention it otherwise I will spoil the story). But it was a heart-wrenching scene (and difficult to write tastefully and required lots of editing to get it just right).

8. What do you hope readers take away from Hearts Made Whole?
Readers familiar with my books will know that I'm not afraid to tackle really tough issues. That's especially true in Hearts Made Whole. Since the hero is coming home as a Civil War veteran, he's facing some post-traumatic stress as well as debilitating war wounds that leave him addicted to his pain medicine.

At the same time the heroine is struggling to act as both father and mother to her four siblings while holding down a job as light keeper. She has the overwhelming job of trying to take care of everyone and everything while always remaining strong.

Both characters come to a point where they recognize they can't face all of their overwhelming troubles on their own and cry out to God their desperate need for Him. I hope that readers will take away a desire to turn to God in their most desperate needs too and know that He is there waiting to comfort and help them.

9. Why lighthouses? What fascinates you about these shining beacons?
I'm fascinated with lighthouses for a number of reasons. First, my state of Michigan is home to the greatest concentration of lights in the United States. In fact, Michigan is noted as the state where the most lighthouses were erected. And now today, more than 120 remain compared to 500 total for the rest of the nation.

Not only are lighthouse beautiful and picturesque, but they bring back a sense of nostalgia, poignancy, and romance that few other historical markers do. They're rich in historical details and stories. They're wrought with danger and death. And they're just plain fun to explore. Climbing the winding staircase, reaching the top, and peering out the tower windows (or in some cases going out onto the gallery) is breathtaking.

10. What kind of rules and regulations did lighthouses have?
The rules and regulations for keepers were often very strict. Keepers were expected to maintain spotlessly clean homes and towers, had to be ready for surprise inspections at any time, and had to maintain rigorous log books with accurate records that documented everything from ship wrecks to oil usage to weather conditions.

One rule that I found especially funny was that women were prohibited from painting the lighthouse tower. Obviously their skirts put them at a disadvantage over men, especially for painting jobs that required them to sit high above the ground. Nevertheless, it was one more area where women were not allowed the same privileges as men.


Jody's Bio:
Jody Hedlund is a best-selling and award-winning author who loves history and happily-ever-afters. She makes her home in Midland, MI with her husband and five children. When she's not writing another of her page-turning stories, you can usually find her sipping coffee, eating chocolate, and reading.


Or you're welcome to email me at: jodyhedlund@jodyhedlund.com
Posted by Angela - Bookaunt at Sunday, June 07, 2015