The Printer and the Preacher by Randy Petersen 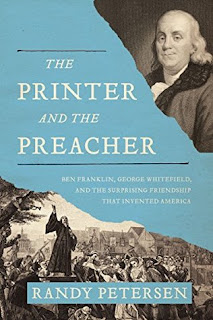 I received this book from Book Look Bloggers in exchange for a fair and honest review
Published: June 9, 2015
Number of pages: 320
Genre: History

Synopsis:
A groundbreaking look at the strange friendship between George Whitefield and Benjamin Franklin, who together defined what it means to be an American.

They were the most famous men in America.  They came from separate countries, followed different philosophies, and led dissimilar lives. But they were fast friends. No two people did more to shape America in the mid-1700s.
Benjamin Franklin was the American prototype: hard-working, inventive, practical, funny, with humble manners and lofty dreams. George Whitefield was the most popular preacher in an era of great piety, whose outdoor preaching across the colonies was heard by thousands, all of whom were told, ôYou must be born again.ö People became excited about God. They began reading the Bible and supporting charities. When Whitefield died in 1770, on a preaching tour in New Hampshire, he had built a spiritual foundation for a new nationùjust as his surviving friend, Ben Franklin, had built its social foundation. Together these two men helped establish a new nation founded on liberty. This is the story of their amazing friendship.
What did I think about this book:
This was a very interesting book. I enjoyed reading Benjamin's biography as well as George's. I did not know who George was before reading this book. I have learned some more history  by reading this book. There were parts of this book that read quickly and parts that were kind of dry. But the book was packed full of information and a good book for a history lover like me. I am glad I got the chance to read this book.

What did I think of the cover
I thought the cover was ok. It was nice to see pictures of both people on the cover.

About the author:
Randy Petersen has written more than fifty books on subjects ranging from history to relationships, psychology, sports, and even word games. Formerly an editor and writer with Christian History magazine, he also prepares curriculum for small-group Bible studies. Apart from his writing, Randy teaches public speaking at a community college, preaches occasionally at his church, and directs in area theaters. He lives in the Philadelphia area.