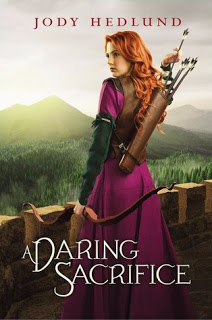 Synopsis:
In a reverse twist on the Robin Hood story, a young medieval maiden stands up for the rights of the mistreated, stealing from the rich to give to the poor. All the while, she fights against her cruel uncle who has taken over the land that is rightfully hers. Forced to live in the woods and hide with the poor people she's grown to love, she works to save and protect them, but she never anticipates falling in love with the wealthy knight who represents all she's come to despise.


Jody's Bio:
Jody Hedlund is a best-selling and award-winning author who loves fairy-tales and happily-everafters. She makes her home in Midland, MI with her husband and five children. When she's not writing another of her page-turning stories, you can usually find her sipping coffee, eating chocolate, and reading.

Or you're welcome to email me at: jodyhedlund@jodyhedlund.com


Interview:
1. You’ve based A Daring Sacrifice a little bit on the Robin Hood story. What drew you to this medieval tale?
I've always loved tales about underdogs rising up against injustice. The story of Robin Hood encompasses such an element, where the poor are unfairly cast from their homes, forced into hiding, and must rely upon their fearless leader to fight for their rights. Instead of a nobleman leading and fighting for the needs of the underdogs, I decided to add a twist and have my heroine, a displaced noblewoman, be the leader of a band of poor outcasts. As a skilled archer, she's gained a reputation as the "Cloaked Bandit" doing her best to protect and provide for the people she's grown to love.

2.  Why Middle Ages/Medieval Times? What draws you to that particular era?
I’ve always loved fairy tales, castles, knights, and damsels in distress. I love the chivalry, honor, and courage that are so often displayed during that time. And I really like how stark and different their way of living was. It’s SO different than how we live that it’s fascinating. Additionally, I love that the Middle Ages was filled with so much danger not only from wars and battles among kings and lords, but also due to the elements, harsh living conditions, and diseases. It was a time for plagues, dungeons, torture, and all the stuff that makes for a good plot!

3. The hero and heroine aren’t together very long before “falling in love.” Do you believe love at first sight is possible?
Of course working within the parameters of 200 pages is as constricting as the two hour movie romance development. It’s not ideal and couples often get together more quickly than in real life. I actually don’t advocate the idea of falling in love at first sight. I think there are some dangers that come with that kind of thinking:

We don't have time to test character. When we rush into a relationship, we may not take the time to really get to know the person, especially their inner qualities. It's easy for anyone to put up a facade for a short while, but it's only after time and trials that a person's true colors shine through. If we don't take the time to test another's character, we may get into difficult or even dangerous situations.

We get caught up in feelings. Everyone enjoys the physical rush of a new relationship. And it's all too easy to get caught up in those tingling wonderful emotions and let them dictate our actions instead of operating with sound logic and thinking. That magical quality of love, while nice, can lead to rash and sometimes foolish decisions.

4. The concept of sacrifice is a big part of the book. Why did you choose to focus on that?
Most of the time, we’re conditioned by the world around us through advertisements, commercials, magazines, movies, TV, and even social media to focus on ourselves. We’re bombarded with messages that draw our attention to what we should buy next, what we should wear, how we should feel, where we should go, etc. It’s all about making sure we get our needs met. First. And foremost. The world tells us our personal satisfaction is the most important thing and that we should do whatever it takes to be happy. Unfortunately, that kind of mindset follows us into our dating relationships. All too often we want to have a boyfriend to make us happy. We want someone to make us feel good, look popular, or keep us company. Even more unfortunately, when that type of self-centered mindset follows a couple into marriage, wedded bliss soon turns into a wedded battle as each person vies to get his or her needs met through the other person. A Daring Sacrifice is my attempt to re-introduce this long-forgotten and little-used idea of selfsacrifice back into dating relationships.

5. With your busy life, how do you find time to read?
Two words. Audio books. I have an Audible.com membership and I keep them in business. I have the Audible app on my phone so I can listen to a book at the quick touch of a button, rather than having to go to the library and check out CDs only to find that they’re scratched when I get them home into the CD player that only works half the time! Yes, having audio books available for quick and easy download is my comfort food.

6. How do you name each character? I can only imagine how difficult it could be.
Yes, the process of coming up with names is quite complicated, and I generally take a lot of elements into consideration. I keep a running list of all the heroes and heroines of my books and try not to duplicate anything too closely to a name I've already used. I also take into consideration names used doing the time period and the ethnicity of my characters. I also consider things like symbolism, contrast, mood, stereotypes, etc.

7. What two jobs have you had that would surprise people?
Do tell! When I was in high school I worked at Dairy Queen and I loved getting to taste the "mistakes." It was a nice job perk! In college, I worked as a nurse’s aid in a nursing home with Alzheimer and dementia patients. It was an incredibly challenging job that makes me appreciate anyone who works in a nursing home.

8. Out of all the sounds in the world which are your favorite?
My children's laughter and the percolating coffee pot.
Posted by Angela - Bookaunt at Thursday, March 10, 2016