In Another Life by Julie Christine Johnson - Spotlight and Excerpt 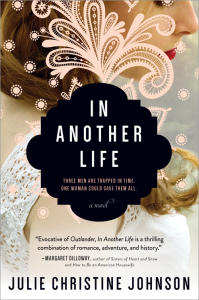 Synopsis:
Historian Lia Carrer has finally returned to southern France, determined to rebuild her life after the death of her husband. But instead of finding solace in the region’s quiet hills and medieval ruins, she falls in love with Raoul, a man whose very existence challenges everything she knows about life–and about her husband’s death. As Raoul reveals the story of his past to Lia, she becomes entangled in the echoes of an ancient murder, resulting in a haunting and suspenseful journey that reminds Lia that the dead may not be as far from us as we think. Steeped in the rich history and romantic landscape of the Languedoc region, In Another Life is a story of love that conquers time and the lost loves that haunt us all.

About the author:
Julie Christine Johnson is the author of the novels In Another Life (February 2016, Sourcebooks Landmark) and The Crows of Beara (September 2017, Ashland Creek Press). Her short stories and essays have appeared in several journals, including Emerge Literary Journal, Mud Season Review;
Cirque: A Literary Journal of the North Pacific Rim; Cobalt, the anthologies Stories for Sendai;
Up, Do: Flash Fiction by Women Writers; and Three Minus One: Stories of Love and Loss
and featured on the flash fiction podcast, No Extra Words. She holds undergraduate degrees in French and Psychology and a Master’s in International Affairs. A runner, hiker, and wine geek,
Julie makes her home on the Olympic Peninsula of northwest Washington state with her husband.
In Another Life is her first novel.

Buy the book | on Amazon | on Barnes & Noble | on Indiebound

Excerpt:
Lia took a seat on a low wall surrounding the preserved stretch of the Via Domitia, the oldest portion of the Roman road that had passed through southern France. The monument was set at one end of the square, a perfect perch to watch Narbonne greet the day. From her basket, she took out a small stainless steel thermos of coffee and a tender, yeasty brioche.

She filled the thermos cup, and when she brought the steam- ing coffee to her lips, she saw him at a table on the edge of the café’s patio. Wearing a black suit and a pale lavender dress shirt, he sat with one arm stretched across the back of a chair and a black leather loafer resting on the opposite knee. An espresso and a croissant sat on the tiny table before him like props on a stage set. A breeze funneling through the passage lifted his golden-brown hair. Sunglasses shielded his eyes from the glare of sunlight on wet stone, sunlight that glinted off a platinum watch as he raised the miniature cup to sip his coffee.

He glanced at the watch and stood, his suit falling into place over long limbs. Even the most insignificant gestures—placing coins on the table, smoothing his jacket—were sensual, and from behind her sunglasses, Lia’s eyes lingered over his trim, graceful frame. Imagining toned muscles underneath the elegant, bespoke suit, she bit her lip against a rush of desire.

The stab of guilt that followed her body’s yearning dimmed the brightness of the day. The coffee tasted sour, and the bri- oche had staled in the cool air. Lia turned her back on the café and dumped the black coffee on the cobblestones. Standing, she brushed crumbs from the front of her loose, gray wool trousers.

“Lia Carrer?” She glanced over her shoulder, and surprise became an awkward self-awareness. She wondered if she had coffee breath or crumbs on her face, and she resisted the urge to touch her hair, lick her lips.

“Pardon me for disturbing you.” The man from the café removed his sunglasses to reveal ebony irises ringed by bands of gold. “I’m Lucas Moisset, a freelance photographer. I was working for the Federation of Mountain Cyclists that day, in Arques.” His broad Languedoc vowels were clipped by a Parisian inflection. “I recognized you from photos. I am so sorry for your loss.” He pulled a thin wallet from the inner breast pocket of his jacket. “My studio is here in Narbonne. If there is anything you need, call me at any time.” He handed her a business card.

It took a moment to recognize the watermark of the bird etched behind his name: a peregrine falcon. The same shape as the brass plaque that bore the name of her cottage in Minerve. Pèlerin, a pilgrim who makes a journey to a holy place; faucon pèlerin, the majestic bird of prey that haunts the Languedoc skies. Moisset meant falcon in Occitan.

Sunday, March 6
Review + Giveaway at An Accidental BlogGuest-Post at History from a Woman’s Perspective

Wednesday, March 9
Review + Giveaway at
History from a Woman’s Perspective

Spotlight + Giveaway at Words And Peace

Thursday, March 10
Review at With Her Nose Stuck In A Book

Giveaway:
You can enter the global giveaway here or on any other book blogs participating in this tour.
Be sure to follow each participant on Twitter/Facebook, they are listed in the entry form below.

Visit each blogger on the tour: tweeting about the giveaway everyday of the Tour will give you 5 extra entries each time! [just follow the directions on the entry-form]

Global giveaway open to US residents only: 5 participants will each win a print copy of this book.
Posted by Angela - Bookaunt at Thursday, March 03, 2016