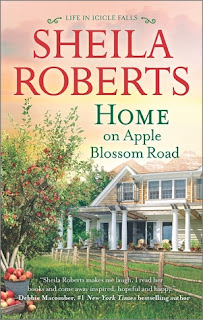 Synopsis:
Home is where the love is…

Colin Wright and Mia Blair grew up in Icicle Falls, but they left years ago—and not on good terms. Now Colin's grandmother, Justine, has died, and they've come home to honor this woman they both loved. That's when they get some unexpected news. They're about to inherit something. Jointly. They just have no idea what. It turns out that Justine's designed a treasure hunt for them, like the ones they enjoyed when they were kids and best friends.

But they're not kids anymore, and they sure aren't best friends. As for that young love they once shared? Well…it's complicated.

On the trail of Justine's treasure, they follow a series of clues that take them down memory lane—ending up at the orchard on Apple Blossom Road. What will they find there? And what did Justine know that they didn't?

What did I think of this book:
Well Sheila Roberts has done it again. She has another hit with the latest installment in the Icicle Falls series. Following Colin and Mia on the treasure hunt after Grandma Justine passes on was like going on an emotional roller coaster. I liked the letters that were included from Justine to Emmaline. They added just a little bit of back history to her story. It was also nice going down memory lane with both Colin and Mia. You got to hear how each of them felt about the past as well as all the emotions the two of them were feeling as they went along on the treasure hunt. I did not like Lorelei one bit, she was a spoiled rich (or wanna be rich) lady. I felt so bad for Mia thinking that Dylan (Colin's dad) did not like her and felt she had something to prove to him her whole life. There were many time I wanted to reach through the book and shake both Mia and Colin and ask them what they were thinking. It was also fun to see all of the old friends we have grown to love from Icicle Falls. I thought the ending of the book was very fitting. I can't wait until the next book comes out. Sheila is on my list of all time favorite authors and I have enjoyed each book I have read by her. They make you feel like you are home.

About the author:
Sheila Roberts lives on a lake in the Pacific Northwest. Her novels have been published in several languages. Her book, Angel Lane, was an Amazon Top Ten Romance pick for 2009. Her holiday perennial, On Strike for Christmas, was made into a movie for the Lifetime Movie Network and her novel, The Nine Lives of Christmas, was made into a movie for Hallmark . You can visit Sheila on Twitter and Facebook or at her website (http://www.sheilasplace.com). Facebook
Posted by Angela - Bookaunt at Saturday, March 12, 2016