The Thorn Keeper by Pepper D. Basham - Spotlight and Excerpt 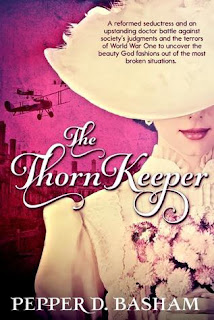 With her past in shambles, how can she fashion a future of hope?

Catherine Dougall’s past of manipulation has left her future in threads. With a new faith, she longs to take the remnants of her life and make something beautiful, but shame, societies’ judgments, and the natural consequences of an unplanned pregnancy test her newfound hope. Dr. David Ross doesn’t help either. His kindness, sacrifice, and tenderness tempt her to impossible dreams. A fallen woman doesn’t merit a fairytale.
David Ross has made every effort to keep his life above reproach. His passion for the sick pump fresh purpose through his choices, but without financial support to maintain his war hospital, all is lost. When his notorious aunt offers an easy solution, David is tempted to give in to her demands, but his growing affection for the reformed flirt, Catherine Dougall, unwinds the careful wall around his heart and offers an unexpected choice.
When the worst of war tears them apart, can love renew the memory of what was lost or will tragedy steal away their hope forever.
From the beautiful Derbyshire countryside to the trenches of World War One, Catherine and David must learn to trust in a God who designs a masterpiece out of brokenness and fashions hope in the most unlikely places.

Pepper Basham is an award-winning author who writes romance peppered with grace and humor. She currently resides in the lovely mountains of Asheville, NC where she is the mom of 5 great kids, speech-pathologist to about fifty more, lover of chocolate, jazz, and Jesus, and proud AlleyCat over at a group writing blog, The Writer’s Alley. Her debut historical romance novel, The Thorn Bearer, released in May 2015, with the second arriving in February 2016. Her first contemporary romance debuts in spring 2016.

David stopped in the shadows as Catherine caught up with a young woman on the threshold of a dilapidated building. The girl looked unwell, with the frame of an advanced pregnancy and the pallor of hunger. Her tattered dress barely offered any barrier from the early autumn chill. David couldn’t understand the exchange, but Catherine’s intentions became clear.

She set the basket of food down at the woman’s feet and slipped off her fashionable coat. Despite the obvious objections of the girl, Catherine wrapped the coat about the girl’s shoulders, brooking no refusal. David’s grin started slow and spread across his face.

Catherine wasn’t consorting with people from her past.

She was living graciously in her present.

His chest expanded with a warm rush of relief…and something else less definable.

Catherine turned back toward his direction. He waited for her to step into the alleyway before emerging from his hiding place.

“Dav—” She snapped her rose lips closed around his name and blinked those large sapphire eyes at him. “What on earth are you doing here?”

“I was wondering the same about you.”

She pressed her palm to her chest and drew in a deep breath. “I…I was completing an errand.”

“That took you all the way to Old Rutland?”

She opened her mouth to answer but then stopped. The twinkle in her eyes should have provided fair warning before she unleashed her disarming smile, but it unfurled with unsteadying potency, leaving him a bit mesmerized. She unwittingly wielded it like a weapon, but oh, what a dangerous tool if she ever used it with purpose.

“You have the most impeccable timing, Dr. Ross.”

Her sudden change in topic took him off-guard. “Do I?”

She tossed a look over her shoulder as she walked back toward Main Street. “Providential, you might even say.”

The pixie glint teased his own smile alive. “Oh really?”

Her gaze took a subtle pleading turn. “Would you happen to have an extra pound? Or several shillings at the very least.”

He covered his growing smile by looking away. After witnessing her exchange with the poor woman on the street, he knew very well why she needed the additional funds. “Didn’t I give you enough for the supplies this morning?”

“Yes…well, I procured a few additional items.” She rubbed her palms against her arms in an attempt to warm herself against the morning breeze, deliberately keeping her gaze from his. “Unforeseen, you understand.”

David unbuttoned his coat. “And you lost your coat?”

“Yes, about that.” She looked down at her gown as if realizing her loss. Her words formed slowly, and he could almost see the frantic search for an excuse evolving in her pretty head. “I must have left it somewhere.”

He wrapped his coat around her shoulders, and a few loose strands of her ebony curls tickled his knuckles. He paused, fastened in place by sapphire eyes, the scent of lavender, and a growing tenderness. “How very careless of you.” His words worked out through a whisper.

Catherine pinched the coat against her throat and stepped back, breaking whatever spell held him in place. “I’m afraid it is a rather unlovely character trait, my dear doctor. Yet another flaw to add to my needed reforms.” Her smile returned with a little too much brightness. “But about those extra funds?”

He’d give her persistence, as well as a few other distracting descriptions. Their friendship was an odd one, but authentic in ways he’d never experienced. He knew her past and had witnessed her transformation. Somehow, the knowledge inspired an inexplicable protectiveness and exquisite freedom. No games. No social dance. Beautiful authenticity.

“Miss Dougall, you are aware that we have a strict budget during these war times?"

She fidgeted with the edge of her gloves and finally released a sigh. “I… I reallocated some of the money.”

“You reallocated it?” He punched his lips tight against his burgeoning smile.

“For the best possible reasons.”

“Well, if it is for the best reasons.” He took off his hat and dusted the brim. “I suppose we can cut rations for the wounded to make up the difference.”

She whimpered, eyes rounding like a wounded animal’s. "Over an extra pound?"

She must have recognized his teasing because she narrowed those feline eyes and jammed one hand on her hip. "You enjoy that, don’t you?”

“Not once do you torment my sister with your teasing, and certainly not my mother, but me?” She wagged her finger at him, unleashing his smile. “You practically torture me with it."

“No one else is quite so entertaining."

“Indeed.” She waved a hand in the air. “I assume then, you know exactly why I need the extra money?”

“And how you lost your coat.”

“Yes, that.” Her gaze lingered in his for a second longer, tightening the inexplicable bond he had with her. She looked away. “All because of your ridiculous aunt.”

Catherine resumed her walk with a quicker step, a habit he’d noticed when she was particularly annoyed or thinking. He rushed to keep up.

“The way she pushes people around in this town is ridiculous. The weak. The strong. She doesn’t care who they are as long as she holds them under her wrinkled old thumb. How can she be so unfeeling?” Catherine paused to send a scorching glare. “She is such a…such a—”

He shoved his hands into his trouser pockets. “What about viper, or perhaps tyrant, or—”

“Wait.” She stopped him with a raised hand. “Why are you helping me come up with insults for her? Aren’t you supposed to keep me on the straight and narrow?”

“Admittedly.” He looked up to the sky, making a poor attempt at keeping his expression thoughtful. He preferred a lighthearted turn in the conversation, untainted by his aunt’s reputation. “But I can only imagine the choices I offered were of a kinder nature than the ones rolling around in that head of yours.”

Catherine opened her mouth as if to object and then stopped, clearly revisiting a few unnamed insults. She offered a repentant sigh. “You’re right.”

“And which of those horrible attributes of my aunt’s has inflamed your cause for justice today?

“This time?” Catherine stepped onto Main Street and slid him a glare. “She’s in danger of becoming a murderer.” 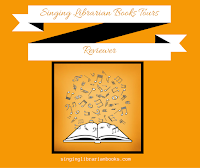