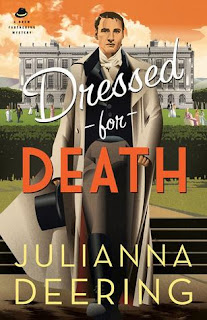 Synopsis:
This Traditional British Cozy Mystery
Gets a Regency Twist

Drew and Madeline Farthering celebrate their six-month anniversary by attending a fancy Regency era costume party. Drew is glad to see Talbot Cummins, an Oxford classmate, and his fiancée, Alice Henley, though many present seem worried about the couple. Everyone's concerns are realized when, at the concluding grand ball, Alice dies of an overdose of cocaine. Tal refuses to believe she took the stuff intentionally, and Drew is determined to find out if her death was an accident or murder.

Drew is shocked and disillusioned when the police arrest Tal's father and reveal that the man has been smuggling drugs into the country for the past twenty years. Reeling from the death of his fiancée and the revelation about his father, Tal begs Drew to find out what's going on. Drew, now questioning his own ability to see people as they really are, does so reluctantly, not ready for the secrets he's about to uncover--or the danger he'll bring down on everyone he holds dear.

What did I think of this book:
This book was very enjoyable mystery to me. I liked the time period in which is was set and enjoyed the Regency era costume party. The characters were fun and I am glad I got to "visit" them again. Tal had many shocks in this story from the death of his fiancee to learning that his soon to be father in law was a drug smuggler. You will learn more about this story as you read the book. I thought there were enough twists and turns to keep me guessing until the end of the story. You will also find yourself not wanting to put the book down so that you can see what happens next. I think the author does a good job with descriptions so much so you can really feel as if you are a part of this story. The characters are also well developed and likeable. This book is number four in the series and I do suggest you read them in order so as to not miss out on Drew's journeys in his personal lfe in the order in which they happen. This is a fun series that I will be watching for the next one to come out to continue to visit Drew and  his new wife along their adventures.

About the author:
JULIANNA DEERING (also writing as DeAnna Julie Dodson) has always been an avid reader and a lover of storytelling, whether on the page, the screen or the stage. This, along with her keen interest in history and her Christian faith, shows in her tales of love, forgiveness and triumph over adversity. A fifth-generation Texan, she makes her home north of Dallas with three spoiled cats and, when not writing, spends her free time quilting, cross stitching and watching NHL hockey. Her series of Drew Farthering mysteries set in 1930s England debuted with Rules of Murder (Bethany House, 2013) and is followed by Death by the Book and Murder at the Mikado (Bethany House, 2014). Dressed for Death, the fourth book in the series, is scheduled for release in March, 2016, followed by Murder on the Moor (Fall, 2016) and Death with Two Faces (Summer, 2017). She is represented by Wendy Lawton of the Books & Such Literary Agency (www.booksandsuch.biz).
Posted by Angela - Bookaunt at Monday, March 14, 2016