Bride of a Distant Isle by Sandra Byrd - Review 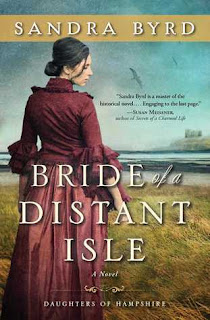 Synopsis:
Miss Annabel Ashton is a teacher at the Rogers School for Young Ladies in Winchester when she takes a brief visit to her family home, Highcliffe Hall at Milford-on-Sea. She believes her stay will be short but soon learns that she will not be returning to the safety of the school. Instead, she remains at Highcliffe, at the mercy of her cousin, Edward Everedge.

Annabel protests, but as the illegitimate daughter of a woman who died in an insane asylum, she has little say. Edward is running out of money and puts the house up for sale to avoid financial ruin. He insists that Annabel marry, promising her to a sinister, frightening man. But as the house gets packed for sale, it begins to reveal disquieting secrets. Jewelry, artifacts, and portraits mysteriously appear, suggesting that Annabel may be the true heir of Highcliffe.

She has only a few months to prove her legitimacy, perhaps with assistance from the handsome but troubled Maltese Captain Dell’Acqua. But does he have Annabel’s best interests at heart?

And then, a final, most ominous barrier to both her inheritance and her existence appears: a situation neither she nor anyone else could have expected. Will Annabel regain her life and property—and trust her heart—before it’s too late?

What did I think of this book:
It has been awhile since I have read a book from this time period. This has always been my favorite time period to read about. I have to say that the author did a good job describing everything so that I/we could get a vivid picture of everything. I thought Miss Annabel was a strong woman who had to go through a lot in her life. She went on an emotional journey in this book learing that she may actually be "more" than what she thought she was. I have to say I did not like Edward or his wife. I thought at times they were quite mean and rude to Annabel.I enjoyed learning about the Great Expedition and what exactly that was about. I also liked how the author included other real life events in this story. I thought that added to the telling of the whole story. In this story we have mystery, romance and adventure which all makes for a good story that keeps moving at a steady pace. I am looking forward to the next book in this series and whatever the author had to offer us next.

About the author:
Sandra Byrd has published four dozen books in the fiction and nonfiction markets, including her two historical series with Howard Books. For nearly two decades, Sandra has shared her secrets with the many writers she edits, mentors, and coaches. She lives in the Seattle, Washington area.
Posted by Angela - Bookaunt at Monday, March 14, 2016