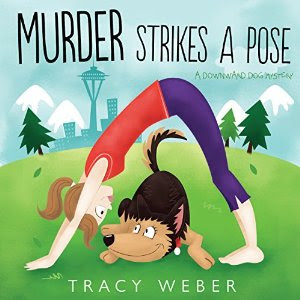 Publisher's Summary
Seattle yoga instructor Kate Davidson often acts more like a champion fighting rooster than the Dalai Lama. When she's not teaching yoga, she spends her time hiding from her creepy landlord and dodging her best friend's relentless matchmaking attempts. Even though her father was a cop, Kate has zero crime fighting aspirations. She has enough trouble keeping her struggling yoga business afloat while trying to live up to yoga's Zen-like expectations.

Then she stumbles over a body in the studio's parking lot.

The police dismiss the murder as drug-related street crime, but Kate knows that George - a homeless alcoholic she had befriended-was no drug dealer. And if the police won't take his murder seriously, she'll just have to solve the crime herself. After all, "Drunk Dies in Drug Deal Gone Bad at Yoga Studio" isn't exactly the free publicity she's been hoping for.

But with Bella's time almost up and the murderer hot on her trail, Kate will have to work fast. Or the next time she practices Corpse Pose, it may be for real.

REVIEWS
“Weber’s debut, which launches the Downward Dog series, should appeal to anyone who likes canines, yoga, and a determined sleuth. ... Cozy fans will eagerly await the next installment.” Publishers Weekly

“Weber’s debut fits into that newest of intriguing niches, what I call “extreme cozies.” While the yoga and the animal rescue (and a potential romance, of course) neatly fit the amateur sleuth mold, Weber breaks new ground with her protagonist’s desire to remedy a social ill, in this case, urban homelessness. The series has tremendous potential, particularly with Kate’s BFF’s humorous help, and some seriously good yoga tips.” Terry Jacobsen Library Journal

“What a treat! A charming heroine, a cantankerous pooch, and a clever page-turner of a mystery make for delightfully original entertainment. You don’t need to love yoga to love this series—its good karma makes it an instant winner.” Hank Phillippi Ryan THE WRONG GIRL (Forge)

“Weber’s debut novel is a yogalicious romp. She mixes yoga with sleuthing and the perils of second-time-around dating into a compelling, inviting read.” Maggie Toussaint DIME IF I KNOW (Five Star/Cengage)

“Kate Davidson’s pluck, humor, and determination make her a welcome addition to the ranks of amateur sleuths. Reading Murder Strikes a Pose made me want to study yoga. It also left me hoping for a sequel so that I can visit with Kate and Bella again.” Laurien Berensen GONE WITH THE WOOF (Kensington)

“Murder Strikes a Pose, by Tracy Weber, is a delightful debut novel featuring Kate Davison, a caring but feisty yoga teacher who’s recently opened her own business, Serenity Yoga. When Kate meets a homeless man named George and his loud but loving German shepherd Bella, life in her colorful Seattle neighborhood turns upside down (or dare I say Downward Dog...). Namaste to Weber and her fresh, new heroine!” Penny Warner HOW TO DINE ON KILLER WINE (Obsidian/Penguin)

“When a good dog seems to go bad, a yoga teacher comes to the rescue in this charming debut mystery. Murder Strikes a Pose pieces together a skillful collage of mystery, yoga, and plenty of dog stories against the unique backdrop of Seattle characters and neighborhoods. The delightful start of a promising new series. I couldn’t put it down!” Waverly Fitzgerald DIAL C FOR CHIHUAHUA (Kensington)

“We hope to see more Downward Dog Mysteries. Our judges thoroughly enjoyed reading this murder/mystery/suspense manuscript. The writing is fresh, the story is relevant on several levels, and the suspense keeps the pages turning. A hands down winner!” Chanticleer Book Reviews


About Tracy Weber:
Tracy Weber is the author of the award-winning Downward Dog Mysteries

series. The first book in the series, Murder Strikes a Pose

, won the Maxwell Award for Fiction and was nominated for the Agatha award for Best First Novel.

A certified yoga therapist, Tracy is the owner of Whole Life Yoga, a Seattle yoga studio, as well as the creator and director of Whole Life Yoga’s teacher training program. She loves sharing her passion for yoga and animals in any way possible.

Tracy and her husband Marc live in Seattle with their crazy new German shepherd pup, Ana. When she’s not writing, Tracy spends her time teaching yoga, trying to corral Ana, and sipping Blackthorn cider at her favorite ale house.

For more information on Tracy and the Downward Dog Mysteries, visit her author website: http://TracyWeberAuthor.com/ 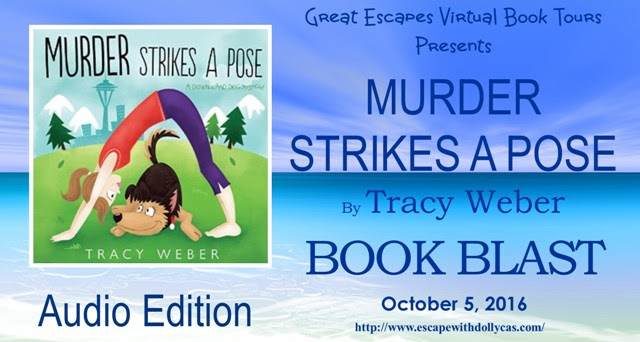