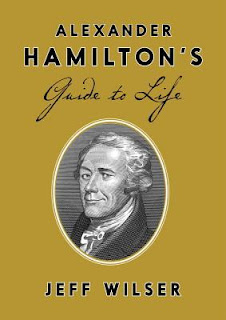 Synopsis:
The life and lessons of the Founding Father who mastered the arts of wit, war, and wealth, longbefore becomingthe subject of Broadway sHamilton: An American Musical

Two centuries after his death, Alexander Hamilton is shining once more under the world s spotlight and we need him now more than ever.
Hamilton was a self-starter. Scrappy. Orphaned as a child, he came to America with nothing but a code of honor and a hunger to work. He then went on to help win the Revolutionary War and ratify the Constitution, create the country s financial system, charm New York s most eligible ladies, and land his face on our $10 bill.The ultimate underdog, he combined a fearless, independent spirit with a much-needed dose of American optimism.
Hamilton died before he could teach us the lessons he learned, but Alexander Hamilton s Guide to Life unlocks his core principles intended for anyone interested in success, romance, money, or dueling. They include:
.Speak with Authority Even If You Have None (Career)
.Seduce with Your Strengths (Romance)
.Find Time for the Quills and the Bills (Money)
.Put the Father in Founding Father (Friends & Family)
.Being Right Trumps Being Popular (Leadership)
For history buffs and pop-culture addicts alike, this mix of biography, humor, and advice offers a fresh take on a nearly forgotten Founding Father, and will spark a revolution in your own life."

What did I think of this book:
Here lately I just can't seem to get enough books about our Founding Fathers so when I saw this book I thought what a great addition to my collection. After reading this book I found that Alexander Hamilton was not only smart but funny at the same time. I liked how the chapter names were a play on words i.e. Seduce with Your Strengths (Romance) and Put the Father in Founding Father (Friends & Family) also there is a little quote at the beginning of each chapter. The author did a good job of really making Mr. Hamilton more real to you as you are reading it and not just another name in history. This was a quick book to read which is in part to the way it is laid out and in part due to the writing style of the author. Even if you are not a history buff you will find this book entertaining and learn a little in the process.

About the author:
Jeff is the author of Alexander Hamilton's Guide to Life.

The topics? It varies. He has written about health, relationships, film, travel, the folly of juice cleanses, hashtags, monks, architecture, books, fashion (not that he’s fashionable), sneak attacks of World War II, how to pick champagne, the intersection of math and magic, Finland’s school system, and the shortcomings of General Custer. He also collaborated with Marc Ecko, the fashion designer and founder of Complex media, on the book Unlabel: Selling You Without Selling Out.

Jeff is likely the only person alive to have written for both GQ and The Knot. His TV appearances, where he occasionally pops up as the token male, have ranged from BBC News to The View. Business and marketing stuff? Sure, he does that too, providing customer-segmentation insights to a +$1 billion publishing company. He’s also the founding editor of ThePlunge.com, the primary website for grooms. (Jeff has never been a groom.)
Posted by Angela - Bookaunt at Saturday, September 24, 2016