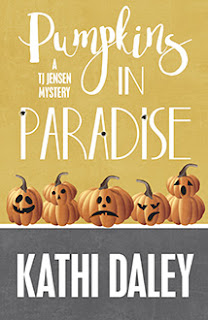 Synopsis:
Between volunteering for the annual pumpkin festival and coaching her girls to the state soccer finals, high school teacher Tj Jensen finds her good friend Zachary Collins dead in his favorite chair. When the handsome new deputy closes the case without so much as a “why” or “how,” Tj turns her attention from chili cook-offs and pumpkin carving to complex puzzles, prophetic riddles, and a decades-old secret she seems destined to unravel.

Come for the murder, stay for the romance.

Kathi lives in the beautiful alpine community of Lake Tahoe with her husband Ken and dog Echo. When she’s not writing she enjoys hanging out on the beach with her children and grandchildren. During the summer she enjoys hiking, kayaking, mountain biking, wakeboarding, and sunset cruises on the lake. During the winter she enjoys cross country skiing, snowshoeing, and curling up by a fire with a good book.

Kathi uses her mountain home as inspiration for her books, all which include appearances by the wildlife she shares her life with.

Guest Post:
Setting the Scene
If the Tj Jensen Paradise Lake Mystery Series was ever made into a movie there are several key ‘sets’ that would need to be included. I think that the places that make up the series are in many ways as important as the series itself.

Maggie’s Hideaway: Maggie’s Hideaway is a lakeside resort which Tj’s grandfather built and her father now runs. The resort is perched on the west shore of Paradise Lake and features individual cabins, an inn with mountain themed rooms, a lakeside restaurant, and a family campground. In Pumpkins in Paradise the inn is described as: a river rock fireplace dominated the space in the center of the room, while huge picture windows lined the back wall, transporting the beauty of the lake and surrounding forest into the interior of the mountain lodge. It was a perfect fall day, cool but sunny, with just a few clouds hinting at the storm she knew was brewing over the summit. A lone coyote walked along the now-deserted beach as squirrels scurried across the wooden deck gathering pine nuts for the long winter ahead. The resort also has its own: gas station, stable, ice cream parlor, marina, and outdoor rentals.

The Antiquery: The Antiquery is a café/antique store that Tj’s best friend Jenna owns along with her mother Helen. Helen is an antique buff who sells the antiques she discovers and refurbishes in half of the retail space, while Jenna runs a café in the other half. In Pumpkins in Paradise we find that: During the summer, visitors from the beach across the street were lined out the door from opening to closing, but during the off season the Antiquery felt a lot like a gathering in someone’s kitchen, where locals congregated in booths sharing a meal and discussing the latest news. The kitchen in The Antiquery was both functional and homey. Spotlessly clean commercial appliances were coupled with copper pots and colorful accents, giving the room a cozy feel. Large baskets of seasonal produce were arranged around the room, providing a lived-in ambience.

The Library: In Pumpkins in Paradise we learn: The library was one of Tj’s favorite places in town. Built as a bordello at the turn of the century, it had been converted into a library more than sixty years earlier, a few years after the town was incorporated. The downstairs, which at one time had served as a common room for entertaining, held a large wooden counter that was now used as a reference desk but originally served as the bar on which girls had danced to entertain the men. Behind the counter were rows of bookshelves that held reference materials that could only be accessed with librarian supervision. In front of the counter was an open area in which round tables surrounded by chairs were provided for patrons. The upstairs was divided into smaller rooms, converted from bedrooms into bookrooms, each with its own subject matter. One room was decorated in nursery rhymes and held children’s books, another housed fiction, yet another reference and business books, and another self-help and religion. Each bookroom contained long sofas or cozy chairs for visitors who wished to preview a book before checking it out and taking it home.

The High School: Serenity High School and Serenity Elementary School had been built on the same plot of land, with a common library, administration office, and cafeteria. Large beige buildings with multiple wings and indoor walkways had been laid out in a pattern Tj likened to a giant spider caught in a web.

Murphy’s Bar: During the course of all the books it seems that the gang meets up at Murphy’s Bar to have a cold one and discuss the case. Murphy’s is an old fashion bar with wooden stools and tables and pool tables in the back room. Tj has been going to the bar ever since she was a child who tagged along with her grandpa.

Rob’s Pizza: Another place to gather and discuss the latest case. Rob’s Pizza is a comfy joint with vinyl booths, red-checkered tablecloths, team pictures on the walls, video games, and the best pizza west of the Rockies.

There are other locations in town but I think you can pretty much count on these 6 places showing up in most of the books.

Giveaway:
The winner can choose either a Kindle of Paperback Copy of any Tj Jensen book
Click here for giveaway

Books in the Tj Jensen Mystery Series:
Henery Press is releasing the 1st 6 books in this series on September 6, 2016
• PUMPKINS IN PARADISE