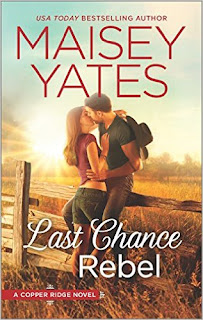 The man who ruined Rebecca Bear’s life just strolled back into it with one heck of an offer. Years ago, Gage West’s recklessness left Rebecca scarred inside and out. Now he wants to make amends by gifting her the building that houses her souvenir store. Rebecca won’t take Gage’s charity, but she’s willing to make a deal with the sexy, reclusive cowboy. Yet keeping her enemy close is growing dangerously appealing…

He’s the wild West brother, the bad seed of Copper Ridge. That’s why Gage needs the absolution Rebecca offers. He just didn’t expect to need her. After years of regretting his past, he knows where his future lies—with this strong, irresistible woman who could make a black sheep come home to stay…

What did I think of this book:
This is the first book that I have read in this series and I did not feel lost. Normally I would read a series in order but for some reason I did not realize this was a part of a series until after I committed. I am glad I read this book as it was an easy read. Sometimes I just need a fun book that I don't have to think about much. There is a lot of emotion that the characters go through when you are reading this book. The author did a good job of describing them as well. I thought the characters were well developed and likable. I think if I read the entire series from the beginning to now I would have enjoyed it even more. Now don't get me wrong this was a good book I just think if you read an entire series you get even more out of it. If you are looking for a good romance to read then I suggest you pick up this series.

About the author:
New York Times and USA Today Bestselling author Maisey Yates lives in rural Oregon with her three children and her husband, whose chiseled jaw and arresting features continue to make her swoon. She feels the epic trek she takes several times a day from her office to her coffee maker is a true example of her pioneer spirit.