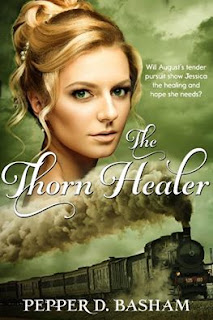 Synopsis:
Jessica Ross returns from WWI to her small Appalachian community of Hot Springs, NC after she is wounded in an explosion and German gunfire. Her hopes of a quiet life, as far away from the trenches and filthy Germans as possible, are demolished as soon as the train pulls up to the depot. The grounds of the beautiful Mountain Park Hotel are littered with barracks and internees, German internees, who have been living and working in her town for the past year. As she steps out of the train she sees a group of the men marching by. Her wounded leg trips her and she lands right in the arms of one of them. Sparks of attraction fly, but Jess’s bitterness stems deep. She will never trust another German.


Unfortunately for her, August Reinhold has found a place in her grandparents’ hearts. In her absence, his work on her grandfather’s farm and his diligent help in his clinic has made August a constant fixture in their lives.

About the author:
Pepper D Basham has been telling tales ever since she was a little girl. When her grandmother called her a “writer” at the age of ten, Pepper took it as gospel and has enjoyed various types of writing styles ever since. A native of the Blue Ridge Mountains, mom of five, speech-language pathologist, and lover of chocolate, Pepper enjoys sprinkling her native Appalachian culture into her fiction wherever she can. She currently resides in the lovely mountains of Asheville, NC, where she works with kids who have special needs, searches for unique hats, and plots new ways to annoy her wonderful friends at her writing blog, The Writer’s Alley. She is represented by Julie Gwinn, and her debut novel, The Thorn Bearer, arrives on May 7th 2015 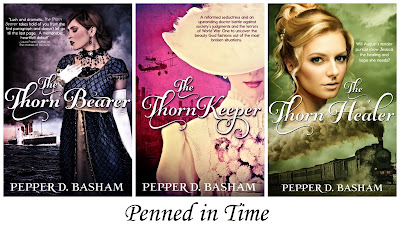 The Thorn Bearer Synopsis:
From the decks of the ill-fated Lusitania to the smoke-filled trenches of WW1, Ashleigh must choose between the forgiveness of her past, life in the present, and a Savior who can rescue her from them all.

When her fiancé leaves her eight months before their wedding, the unexpected blow ignites a battalion of insecurities stemming from her father's intimate betrayal. Her worst fears are confirmed - who could ever love a soiled woman? In an attempt to escape the shame and disappointment of her past, Ashleigh boards the ill-fated Lusitania to cross the war-torn waters of Europe. Much to her dismay, she isn't traveling alone.

Sam Miller is always making up for his best friend's mistakes. Determined to help Ashleigh, he offers his compassion and protection as she ventures across a perilous sea. With the faint hope of renewing his lost love for Ashleigh's sister, Sam never expects to find the woman of his dreams in his best friend's former fiancé and his own childhood companion. As they travel across the Atlantic, neither is prepared for the life-altering and heart-breaking journey of their friendship. When the truth of Ashleigh's past explodes in the middle of war and Sam rejects her, Ashleigh must decide if God is enough - or if the double weight of her betrayal and past will crush her life forever.

The Thorn Keeper Synopsis:
With her past in shambles, how can she fashion a future of hope?
Catherine Dougall’s past of manipulation has left her future in threads. With a new faith, she longs to take the remnants of her life and make something beautiful, but shame, societies’ judgments, and the natural consequences of an unplanned pregnancy test her newfound hope. Dr. David Ross doesn’t help either. His kindness, sacrifice, and tenderness tempt her to impossible dreams. A fallen woman doesn’t merit a fairytale.
David Ross has made every effort to keep his life above reproach. His passion for the sick pump fresh purpose through his choices, but without financial support to maintain his war hospital, all is lost. When his notorious aunt offers an easy solution, David is tempted to give in to her demands, but his growing affection for the reformed flirt, Catherine Dougall, unwinds the careful wall around his heart and offers an unexpected choice.
When the worst of war tears them apart, can love renew the memory of what was lost or will tragedy steal away their hope forever.
From the beautiful Derbyshire countryside to the trenches of World War One, Catherine and David must learn to trust in a God who designs a masterpiece out of brokenness and fashions hope in the most unlikely places.