Why We Write Edited by Meredith Maran - Review 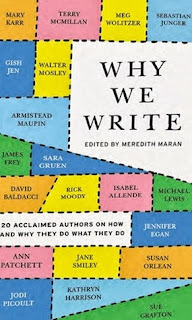 Anyone who's ever sat down to write a novel or even a story knows how exhilarating and heartbreaking writing can be. So what makes writers stick with it? In Why We Write, twenty well-known authors candidly share what keeps them going and what they love most—and least—about their vocation.

What I thought of this book
I really enjoyed this book so much so that I read it in two days. It was nice hearing the author's answers to the questions asked by Meredith. Each author answered the same question: Why I write. The only I did get tired of is that a lot of the authors would start off by saying I write because I can't not write or I don't know how to do anything else. I did make some notes for some of the author's as certain things just stood out to me. So I will share those.

Isabel Allende - writes all her books in Spanish and then they are translated into English. Also she starts each of her new books on January 8th.

James Frey - I do not like him one bit. The way he wrote his answers was very arrogant and rude. As a side note I did read his book when it came out and thought it was a decent book but when I found it he lied I was a little upset. In this book it does say that his agent pitched his book as a fiction book seven times and was rejected each time so then the agent decided to pitch it as a memoir. Which resulted in a lot of backlash once it got out that the book was not about him at all. Maybe that is whey he is the way he is - he is trying to reprove something.

David Baldacci - His first book deal was for a two million dollar advance which ended up being an instant bestseller and a move starring Clint Eastwood. All unheard of for a beginning author.

Sue Grafton - Her father was mystery author C.W. Grafton. She got her first book idea while she was going through her divorce and thinking of ways she could hurt her ex - luckily she did not act on her thoughts and instead made them into a book. She also keeps a journal while writing each book so she can reference back about issues she had before.

Mary Karr - I did not like that she thinks people who write for tv are "really low bar" writers. She also says no one knows how to sell books and "nobody knows how to make money in this industry in any kind of reliable way". She says that if you write 80 pages but have not re-written them many times they are not worth reading as out of those 80 pages only one and half are worth saving. I felt like she put authors today down as a whole and I just did not like that.

In fact here is her wisdon for writers - "Any idiot can publish a book. but if you want to write a good book, you're going to have to set the bar highter than the marketplace's. Which shouldn't be too hard." - To me this is rather rude. I have never heard of her before reading this book and I can promise you I will not be reading anything by her. I would ratehr read my books that she consideres bad books written by idiots. Not a flatterning person.

Terry McMillan - Years ago she went and got a McDonalds application. She fills out this application for each of her characters that she creates, she uses an astrology book to pick their birthday based on the charastics she wants them to have, she creates a five page profile for everyone so she knows everything about them - what shoe size they wear, if their hair is dyed, if they bounce checks, have allergies, what they hate about themselves, what they wish they could change and if they pay their bills on time. She does extensive reasearch when writing her books. Now for what I do not like about her. She went on and on about how the publishing world was racist and how African Americans are not treated right. This is her opinion and I do not know anything about how the publishing world works but I do not like to get into politics nor do I read about them and reading her go on and on and on about how people are racist really put a bad taste in my mouth for her. I appreciate all of the work she does to write her books but do not want to hear her rants. That should be done in another place.

I can not remember a time when I have taken so many notes on a book especially one that was not long. I liked some of the tips the authors gave and enjoyed hearing how each of them got into writing. A very interesting book.

About the author
Meredith Maran, a passionate reader and writer of memoirs, is the author of thirteen nonfiction books and the acclaimed 2012 novel, A Theory Of Small Earthquakes. Meredith also writes book reviews, essays, and features for newspapers and magazines including People, The Los Angeles Times, The Boston Globe, The Chicago Tribune, Salon.com, and More. A member of the National Book Critics Circle, Meredith lives in a restored historic bungalow in Los Angeles, and on Twitter at @meredithmaran. Her next memoir, about starting over in Los Angeles, will be out from Blue Rider Press in 2017.
Posted by Angela - Bookaunt at Monday, September 12, 2016