Days of Sun & Glory by Anna Belfrage - Review and Giveaway 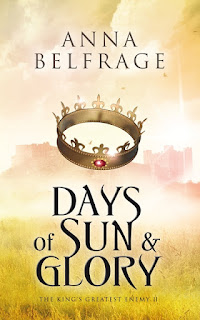 Synopsis:
Adam de Guirande has barely survived the aftermath of Roger Mortimer’s rebellion in 1321. When Mortimer manages to escape the Tower and flee to France, anyone who has ever served Mortimer becomes a potential traitor – at least in the eyes of King Edward II and his royal chancellor, Hugh Despenser. Adam must conduct a careful balancing act to keep himself and his family alive.

Fortunately, he has two formidable allies: Queen Isabella and his wife, Kit. England late in 1323 is a place afflicted by fear. Now that the king’s greatest traitor, Roger Mortimer, has managed to evade royal justice, the king and his beloved Despenser see dissidents and rebels everywhere – among Mortimer’s former men, but also in the queen, Isabella of France. Their suspicions are not unfounded.

Tired of being relegated to the background by the king’s grasping favourite, Isabella has decided it is time to act – to safeguard her own position, but also that of her son, Edward of Windsor. As Adam de Guirande has pledged himself to Prince Edward he is automatically drawn into the queen’s plans – whether he likes it or not. Yet again, Kit and Adam are forced to take part in a complicated game of intrigue and politics. Yet again, they risk their lives – and that of those they hold dear – as the king and Mortimer face off. Once again, England is plunged into war – and this time it will not end until either Despenser or Mortimer is dead.

Days of Sun and Glory is the second in Anna Belfrage’s series, The King’s Greatest Enemy, the story of a man torn apart by his loyalties to his lord, his king, and his wife.

What did I think of this book:
Another hit by Anna. There is something about her books that just draw me from the first page and do not let go until the very end. I enjoy the historical aspect of the book and the characters that just come off the pages. You can always tell that the author does her research when writing her books. It shows through in all the little details she adds. There is plenty of intrigue and suspense in this book to keep you interested until the end. Don't be daunted by the length of this book as once you get to reading you are at the end in no time. I would recommend reading book one before this one but you may also read this as a standalone as the author gives you some tidbits from the first book so you will not feel so lost. A highly recommended author and series.

About the Author
Had Anna been allowed to choose, she’d have become a professional time-traveller. As such a profession does as yet not exists, she settled for second best and became a financial professional with two absorbing interests, namely history and writing. These days, Anna combines an exciting day-job with a large family and her writing endeavours. When Anna fell in love with her future husband, she got Scotland as an extra, not because her husband is Scottish or has a predilection for kilts, but because his family fled Scotland due to religious persecution in the 17th century – and were related to the Stuarts. For a history buff like Anna, these little details made Future Husband all the more desirable, and sparked a permanent interest in the Scottish Covenanters, which is how Matthew Graham, protagonist of the acclaimed The Graham Saga, began to take shape. Set in 17th century Scotland and Virginia/Maryland, the series tells the story of Matthew and Alex, two people who should never have met – not when she was born three hundred years after him. With this heady blend of romance, adventure, high drama and historical accuracy, Anna hopes to entertain and captivate, and is more than thrilled when readers tell her just how much they love her books and her characters. Presently, Anna is hard at work with her next project, a series set in the 1320s featuring Adam de Guirande, his wife Kit, and their adventures and misfortunes in connection with Roger Mortimer’s rise to power. The King’s Greatest Enemy is a series where passion and drama play out against a complex political situation, where today’s traitor may be tomorrow’s hero, and the Wheel of Life never stops rolling. The first installment in the Adam and Kit story, In the Shadow of the Storm, was published in 2015. The second book, Days of Sun and Glory, will be published in July 2016.

Other than on her website, www.annabelfrage.com,
Anna can mostly be found on her blog, http://annabelfrage.wordpress.com – unless, of course, she is submerged in writing her next novel.
You can also connect with Anna on Facebook, Twitter and Goodreads.

Giveaway
To win a copy of Days of Sun & Glory by Anna Belfrage, please enter via the Gleam form below. Rules – Giveaway ends at 11:59pm EST on September 29th. You must be 18 or older to enter. – Giveaway is open INTERNATIONALLY. – Only one entry per household. – All giveaway entrants agree to be honest and not cheat the systems; any suspect of fraud is decided upon by blog/site owner and the sponsor, and entrants may be disqualified at our discretion – Winner has 48 hours to claim prize or new winner is chosen. Days of Sun and Glory

Monday, August 29
Kick Off at Passages to the Past
Spotlight at What Is That Book About

Wednesday, August 31
Review at A Chick Who Reads
Spotlight at Queen of All She Reads

Thursday, September 1
Review at Lampshade Reader
Review at Oh, for the Hook of a Book!

Tuesday, September 6
Guest Post at Oh, for the Hook of a Book!

Tuesday, September 13
Review at Let Them Read Books
Interview at Oh, for the Hook of a Book!

Wednesday, September 14
Review at So Many Books, So Little Time

Thursday, September 15
Review at Seize the Words: Books in Review

Wednesday, September 21
Review at It's a Mad Mad World

Friday, September 23
Review at The True Book Addict
Spotlight at The Reading Queen

Tuesday, September 27
Guest Post at Passages to the Past