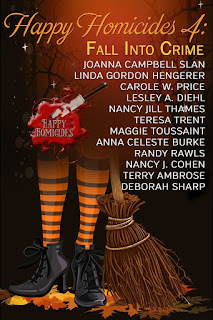 / Vendetta: A Cara Mia Delgatto Mystery – The House of Refuge on Gilbert’s Bar is known for its 150-year history as a way station for shipwrecked sailors. But when Cara Mia visits, the museum becomes the scene of a crime.

/ Dying for School Tea: A Beach Tea Shop Novella – Chelsea Powell and her sisters are providing treats for Citrus Beach High School’s freshman orientation. Can they solve the murder of the beloved softball coach before someone else dies?

/ The Glass Birdhouse – Glass artist Bella hopes to find clues about her student’s death in the woman’s unfinished glass birdhouse.

/ Bobbing for Murder – A visit from Darcie’s family is always chaotic, and this time the relatives bamboozle Darcie into having a Halloween party. It’s a decision that definitely comes back to haunt her.

/ Raven House – When a reporter is murdered after a fundraiser at the historic Raven House, the police call on Jillian and her Yorkie Teddy to help them investigate.

/ Falling for Murder – Helpful hints columnist Betsy Livingston is an expert at household organization but her skills are put to the test when she’s called upon to conduct an efficiency review for a haunted house.

/ Accident, Suicide, or Murder – Retired policeman Jonathan Boykin’s primary interest is improving his golf, but a grieving father’s request to investigate his son’s suspicious death is an entirely different ballgame.

/ Haunted Hair Nights – As a new stepmother, hairstylist Marla Vail hopes to win brownie points by helping her daughter with a school haunted house project. Marla has her work cut out for her when she stumbles over a corpse on the spooky estate grounds.

/ Spirit in the Rock – An invitation to a museum’s grand opening turns into a showdown with the spirit world for amateur sleuth Wilson McKenna.

/ Haunting in Himmarshee – When a ghost comes to call, Mace must sort out the haunted from the homicidal in Himmarshee, Florida.

Bonus Story—
Joanna Campbell Slan/Kiki Lowenstein and the Doodoo – A fun family outings turns into a fearful fright, but Kiki Lowenstein is good at sniffing out bad guys.

Guest Post:
The real story behind Bobbing for Murder
By Lesley A. Diehl

From my past growing up as a farm girl in the Midwest has emerged an image of my relatives that I’m sure they’d never recognize, at least I hope not. The history of Aunt Nozzie and Darcie’s grandmothers is that they first appeared in the Thanksgiving anthologies published by Untreed Reads, The Killer Wore Cranberry: Volumes 1-4. I had so much fun writing these short stories that I thought Aunt Nozzie and her sidekicks deserved another round of fun, this time leading up to Halloween, so wrote Bobbing for Murder for this anthology Happy Homicides 4: Fall into Crime.

In the earlier Thanksgiving anthology, Aunt Nozzie had pretty much destroyed any hope her granddaughter Darcie, the story narrator, had of a normal Thanksgiving holiday, but Darcie is an optimist, so a visit to her house from Aunt Nozzie and the grandmothers on other than Thanksgiving seems harmless enough. For those of us who know what happens when the family congregates, we suspect that Darcie will be disappointed in the outcome of a family get together yet again. Of course, since readers are only along for the laughs in Bobbing For Murder, they will not be disappointed in following where Aunt Nozzie leads—to an apple bob and the possibility of murder. Aunt Nozzie has purchased a motorhome and delights in dominating the interstates on the way to Darcie’s house and, once the trio arrive, they manage to terrify Darcie’s next door neighbor, design unusual Halloween costumes for themselves, hit on the president of the college where Darcie teaches and cause the earth to tilt several degrees on its axis. Then the fun begins.

Yes, these are my relatives, fictionalized, of course, but the truth is that they are based upon actual people with their own unique personalities. Aunt Nozzie was my favorite aunt who was, in fact, six feet tall with flaming red hair and a mouth a dock worker would have admired. I never saw her back down to anyone, even if she was wrong. Her taste in men ran to those hitched but with marital problems. Her favorite color was purple, and she used it as others used beige or white in house décor. She applied this color principle to her clothing also, and she accessorized with large, chunky, some would say gauche, costume jewelry. The woman was flamboyant. As a kid, I thought she was the most wonderful person I’d ever met. And, yes, it’s true. She worked as a bartender and brought me with her on the job. I loved it.

Aunt Nozzie’s mother, referred to in the story as Grandma Papa was the only short person in our entire family, coming in a little taller than a hobbit and wearing her six foot tall daughter’s hand-me-downs. I especially remember the shoes: size ten or eleven made to fit Grammy’s feet by attaching gros grain ribbons on which she tied over her instep. She never bought anything new, always reusing what was at hand. My real Grandma Papa grew the beautiful flowers in her garden and set them in large vases on her front porch where people driving by would stop and photograph them. One of the saddest days in my life was when she no longer could work her garden and couldn’t tell the flowers from the weeds, so she placed weeds in those vases and set them out on the porch. I hadn’t the heart to tell her they weren’t her beautiful flowers.

My other grandmother, called Grandma Mama in the story, was my mother’s mother and my favorite grandmother. She was the sweetest woman to everyone, warm, friendly and unfortunately burdened with a distant, brooding, nasty husband. She was Swedish and did sing Swedish songs to me. I don’t know if she understood the language or had only memorized the words to the songs. She had a real taste for Muscatel wine and for Ann Page fruitcakes which she soaked in rum. The only thing she didn’t like was peppermint stick ice cream. I don’t like it either.

I hope you’ll enjoy Bobbing For Murder. After reading about my family here, I’m sure you’ll be able to see the connection with the gals in the story and understand how fortunate I’ve been in being able to pair my imagination with some really unusual real life people.

Do you like humorous cozy mysteries or prefer the more serious ones? Leave a comment below, and I’ll pick a winner for the first novel in my Eve Appel mysteries, A Secondhand Murder.

About the author Lesley A. Diehl
Lesley retired from her life as a professor of psychology and reclaimed her country roots by moving to a small cottage in the Butternut River Valley in Upstate New York. In the winter she migrates to old Florida—cowboys, scrub palmetto and open fields of grazing cattle, a place where spurs still jingle in the post office, and gators make golf a contact sport. Back north, the shy ghost inhabiting the cottage serves as her literary muse. When not writing, she gardens, cooks, frequents yard sales and renovates the 1874 cottage with the help of her husband, two cats and, of course, Fred the ghost, who gives artistic direction to their work.

She is the author of a number of mystery series and mysteries as well as short stories. The third book in the Eve Appel murders (from Camel Press) A Sporting Murder was awarded a Readers’ Favorite Five Star Award and her short story Gator Aid a Sleuthfest (2009) short story first place. She hopes the Aunt Nozzie and grandmothers stories will not result in either her being thrown out of her family or possession by one of her deceased family members.

Find out about the authors on their webpages below.