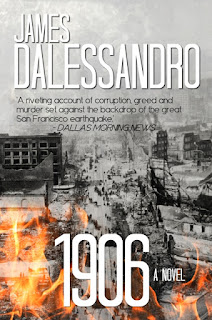 Synopsis:
Every disaster has a backstory, none more thrilling than this one. Set during the great San Francisco earthquake and fire, this page-turning tale of political corruption, vendettas, romance, rescue—and murder—is based on recently uncovered facts that forever change our understanding of what really happened. Told by a feisty young reporter, Annalisa Passarelli, the novel paints a vivid picture of the Victorian-era city, from the mansions of Nob Hill to the underbelly of the Barbary Coast to the arrival of tenor Enrico Caruso and the Metropolitan Opera. Central to the story is the ongoing battle—fought even as the city burns—that pits incompetent and unscrupulous politicians against a coalition of honest police officers, newspaper editors, citizens, and a lone federal prosecutor.

With the appeal and texture of The Alienist, Carter Beats the Devil, and the novels of E. L. Doctrow, James Dalessandro weaves unforgettable characters and actual events into a compelling epic.
AMAZON | BARNES & NOBLE | INDIEBOUND | KOBO

Praise for 1906:
“…an imaginative and dense interplay between fact and fiction …of corruption, crime lords and the great San Francisco earthquake…” -Publisher’s Weekly

“Imagine ‘Gone with the Wind’ set against the backdrop of the great San Francisco Earthquake…it steals your breath away.” -Bookideas.com

“…will keep you at the edge of your seat.” -The New York Sun

About the author:
James Dalessandro was born in Cleveland Ohio, and educated at Ohio University and UCLA film school. In 1973 he founded the Santa Cruz Poetry Festival with Lawrence Ferlinghetti and Ken Kesey, the nation’s largest literary event. He has written for Playboy, the Examiner newspapers, San Francisco magazine. He was writer of the House of Blues Radio Hour and created the nationally syndicated program “Rock On” with Doors keyboardist Ray Manzarek. He has published four books: Canary in a Coal Mine (poetry); Bohemian Heart (noir detective fiction); Citizen Jane (True Crime); and 1906: A Novel (Historical Fiction). He is award winning writer/director/producer of the documentary film THE DAMNEDEST, FINEST RUINS (PBS/KQED), and writer/producer of the Hallmark Movie “Citizen Jane,” based on his book. He is screenwriter of “1906” the upcoming Pixar/Warner Brothers live action film based on his novel of the same name. He lives in San Francisco with his wife Katie and best pal Giacomo Poochini.
WEBSITE | FACEBOOK | GOOGLE+ | GOODREADS

Blog Tour Schedule
Monday, April 11
Blog Tour Kick Off & Giveaway at Passages to the Past

Wednesday, April 20
Spotlight at Queen of All She Reads

Friday, April 22
Review & Excerpt at With Her Nose Stuck In A Book

Tuesday, May 3
Spotlight at Let Them Read Books

Wednesday, May 4
Spotlight at Broken Teepee

Friday, May 6
Interview & Giveaway at The Maiden’s Court

Monday, May 9
Review at Book Nerd

Thursday, May 12
Excerpt & Giveaway at A Literary Vacation

Friday, May 13
Guest Post at Jorie Loves a Story

Wednesday, May 18
Review at Jorie Loves a Story

Monday, May 23
Review at Svetlana’s Reads and Views
Posted by Angela - Bookaunt at Wednesday, April 13, 2016